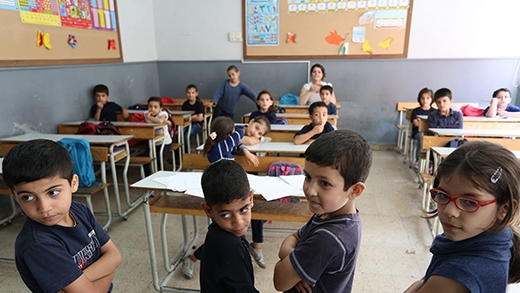 A hashtag for suspending schools in Egypt on Twitter was trending as fears of the spread of the novel coronavirus (COVID-19) are on the rise, however, Minister of Education Tarek Shawki insisted there is no need for such directive.

The World Health Organization (WHO) said on Monday that countries with community transmission should consider closing schools, cancelling mass gatherings, and other measures to reduce exposure.

Earlier, Egypt’s cabinet decided to halt all events and large public gatherings as well as the movement of large groups of people between governorates as part of preventative measures against the spread of COVID-19.

The Ministry of Interior also decided to suspend visitation for prison inmates nationwide for 10 days due the disease fears.

In the meantime, the Ministry of Youth and Sports has also taken preventative measures by cancelling all sports events except international activities. It has also halted all events and sports gatherings of intensive density and has coordinated with the Ministry of Health to sterilise training areas.

The Egyptian Football Association’s (EFA) normalisation committee also issued a decree to hold all upcoming football matches without fans in order to ensure the public’s safety. “All matches are to be held without fans until further notice,” the EFA said in a statement on Tuesday.

Meanwhile, the Ministry of Health announced late Monday that it has detected four new cases of COVID-19; three Egyptians and a foreigner. At the time of writing, the total number of Coronavirus cases in Egypt reached 59, of whom 26 have recovered.

As for schools and universities, both the ministries of education and higher education denied any intention to halt this semester.

Noteworthy, Egypt’s schools are overcrowded with students, and parents fear that such mass gatherings coupled with the poor standards of hygiene may act as an incubator for the virus.

The Education Minister said late Monday in televised statements that suspending schools will not be determined by social media pressures. Halting schools over a disease means we have a pandemic, which, he said, is not the case in Egypt. “It (the decision) will affect Egypt’s economy, stock exchange, tourism, and civil aviation,” he said.

The Ministry of Education has already issued a list of restrictions for students who returned to Egypt recently as part of precautionary measures against COVID-19. It also ordered a distance of one metre between students and decrease unnecessary gatherings at schools.

Noha Sami, a 33-year-old housewife, said she would not prevent her 5-year-old daughter from going to school. “I am a bit calm because the school administration (a private one), is doing their best to some extent.”

“They do regular check-ups and there is a doctor who follows up on sick students with their parents. But if the ministry decided to halt schools, we will follow the decision, but before that, I am not preventing my daughter from school,” Sami added.

Abdul Basit has a daughter who goes to university daily. “Even the professors haven’t made any exception for students. She has to be in class from 7:00 am until 10:00 pm. But I gave her vitamins and make sure she washes her hands regularly.”

She also has a son in high school. “He doesn’t usually go to school, but he has to go to education centres for private tuition, and he must attend his lessons.”

“I am not sure why the government is not halting schools and universities, especially since the disease is spreading and the number of cases is on the rise. Honestly, I am not sure if it is the right decision to not suspend schools or if it is only recklessness with students’ health,” she added.

People also reacted on social media to Shawki’s remarks. Some denounced that the government does not want to suspend schools to protect students, while others agreed that such a decree would only raise fears and panic among people.

“Yes, mothers have to worry about their children and this is their right, especially with the current situation of healthcare in Egypt and the lack of confidence between the government and the people,” Sara, a Twitter user, said.

Hala, another twitter user, agreed with Minister Tarek Shawki that the government should not bend to the whim of social media users when making a decision like this. “I agree with him, the fate of millions of students should not to be determined under social media pressure.”