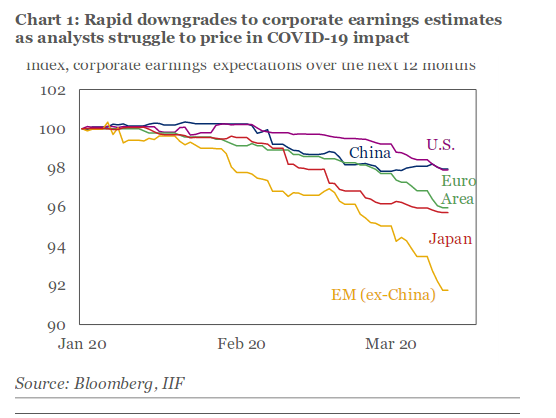 As the world succumbs to a global pandemic and oil prices go sporadic, corporate earnings become almost sky high relative to earnings, while prospects deteriorate to almost $75 trn,  which all culminates to the fast growing mountain of global corporate debt (ex-financials) currently stands at around 93% of global GDP vs 75% in the run up to the 2008 global financial crisis, according to the Institute of International Finance (IIF) in its latest report.

The IIF mentioned that as high corporate debt becomes increasingly exposed to refinancing and slowling global growth, firm-level data highlights a rapid buildup in corporatesector leverage in many mature markets (relative to earnings) starting from 2018.

The IIF said some of the highest debt burdens are in sectors with weak and volatile earnings profiles.

It pointed out that if analysts continue to mark down earnings forecasts as the impact of COVID-19 becomes clearer, debt-to-EBITDA (earnings before interest depreciation and amortisation) ratios could surge, pushing credit spreads even higher.  Just since mid-February alone, high yield spreads have gone up from 300bp to over 650bp.

When talking about the oil and gas industry, IIF says that it’s in double trouble as COVID-19 causes sharp drops in energy prices, leaving companies at high risk of default.

“Although the average level of debt for energy sector firms is fairly low relative to other industries, many energy companies have limited cash buffers, making it harder for them to ride out prolonged disruptions from unexpected shocks. This is especially true in lower echelons,” the IFF continued.

The IIF expressed a fear of falling, saying that given already high levels

of debt relative to earnings (i.e. weak fundamentals), there is clearly a risk

of abrupt and widespread downgrades from the sizeable BBB category to

growth and some deleveraging in recent years have brought  down EM non-financial corporation debt to GDP to 94% in third quarter (Q3) 2019, from  an all-time high of 98% in 2016.

“However, these are still very high levels, and vulnerabilities persist especially  in countries with heavy reliance on foreign exchange debt and limited policy space,” the IFF continued.

It assured that given the importance of state-owned-enterprises in the EM corporate sector, prolonged economic disruption from COVID-19 could