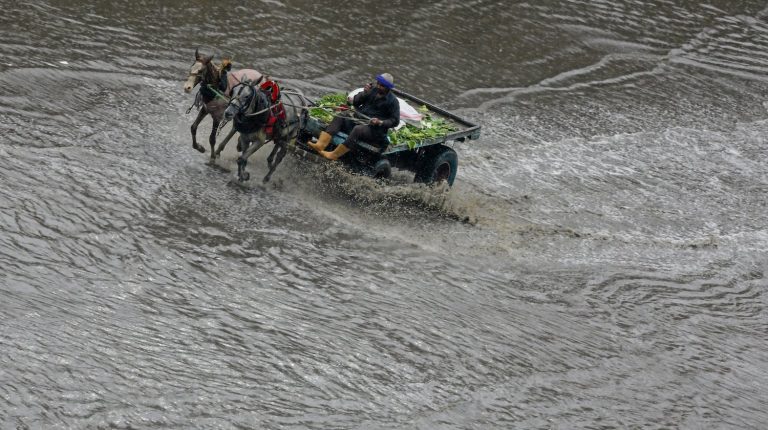 At least 21 people have died due to a heavy rain storm that hit Egypt on Thursday and Friday, causing houses to collapse and prolonged power outages, officials said Saturday.

Among the deaths were eight people, including three children who were killed when four shacks collapsed in Cairo’s informal area of Eshash Zarayeb (May 15 suburb), leaving others displaced, or missing.

In the meantime, several people were killed when they were electrocuted on the Ring road and other areas.

escue forces headed to Eshash Zarayeb, wherea security cordon was imposed near the collapsed shacks soforces can vacate residents from nearby houses for public safety.

Churches in the districts of Helwan and 15 May opened their doors for people whose houses collapsed due to heavy floods, offering them shelter and food.

“Catastrophe in Eshash Zarayeb. Nine deaths, 25 are missing and almost 75% of people’s houses havecollapsed. St. Athanasius Church hosted dozens of Muslim and Christian families. We are waiting for state interference. Most of the suburb residents are poor and work in garbage collection, They are in absolute need ofhelp and alternative houses,” Ishak Ibrahim, a researcher  at the Egyptian Initiative for Personal Rights tweeted on Friday.

Nevine El Kabbaj, Minister of Social Solidarity, visited the affected suburb, saying that she is cooperating with the Ministers of Local Development, Environment, and Housing as well as Egyptian churches and charities to ameliorate the situation at the 15 May suburb.

El Kabbaj said that Egyptian Red Crescent units rushed to treat the wounds and provided relief services for 250 families, adding that the ministry released urgent compensation worth EGP 1,000 for wounded and EGP 5,000 for each family of those deceased.”

The storm caused a railroad collision between two trains on Thursday, wounding 13 people. Shortly after the accident, the trainlines were suspended.

Prime Minister Mostafa Mabdouly said that trains and Cairo’s metro were halted on Thursday for the safety of the citizens, as well as ships due to strong winds.

Thursday’s wave of bad weather is the second to hit the country since unseasonal rains in October 2019, which led to hours of traffic jams as rains flooded roads and tunnels, leading to the death of children and civilians.

Last week, the government declared Thursday a nation-wide day off for public and private sectors as well as suspending school and universities on Thursday and Saturday.

The government urged citizens to stay home during the storm and to keep away from light poles. Madbouly said that there is a need “to re-plan some drainage networks to absorb rain during exceptional conditions.”

Tاhe Ministry of Electricity and Renewable Energy said in a statement on Friday that due to the continuing unstable weather and rainfall several power distribution networks, and switches have been flooded, which has caused power outages in some areas. .

The ministry added that emergency teams are working across the country to tackle the issue.

On social media, people rushed to criticise poor infrastructure of Cairo and other cities which were affected by just a two-day wave of unstable weather. Most areas were affected by hours of power and water cuts  that disrupted internet and cell phone services.

Users shared photos and videos of volunteers rescuing people, children, and pets that were stuck  in the floods. Others shared videos of flooded villages and water-filled apartments in  other Cairo neighbourhoods.