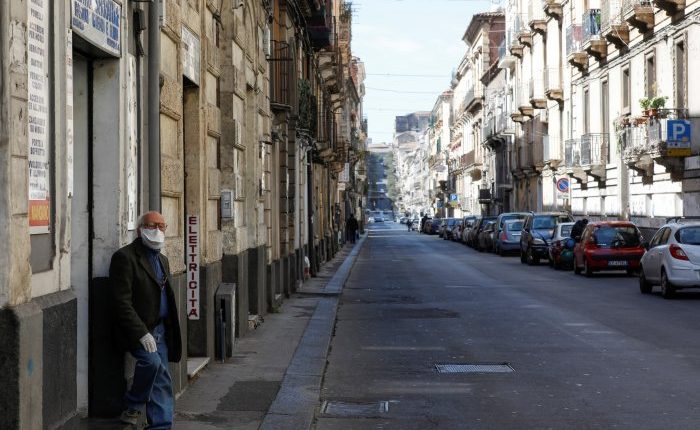 The life in Italy, once was the dream country for many Egyptians seeking decent standard of living, has become a nightmare due to the rapid and unexpected spread of the Coronavirus disease (COVID-19) in the south European country.

Many of the Egyptian expats in Italy have already risked their lives to make it to Europe, crossing the Mediterranean Sea on board improper boats only to earn their livings. They’re now part of the Italian community and have official residencies.

According to the Italian government, the country has about 21,157 coronavirus infections and 1,441 deaths as of March 14, with hospitals working amid severe shortage of medical supply.

Italy’s healthcare system has been overwhelmed by the sudden spike of COVID-19 cases, despite a week-long lockdown of the entire nation in an attempt to curb the spread of the virus.

Italian PM Giuseppe Conte said last Wednesday that supermarkets and pharmacies would be the only retailers to remain open in Italy. The country is under a national lockdown, restricting citizens’ movement and activities until 3 April at the earliest, according to global media reports.

About 1.2 million Egyptians reside in Europe, of whom 560,000 in Italy, equivalent to nearly 13% of the total number of Egyptian expats, according to the Central Agency for Public Mobilization and Statistics.

Daily News Egypt contacted several Egyptian expats in Italy to know how they’re coping with the country’s lockdown and their demands from the Egyptian government in such crucial time.

Ahmed Said, a 36-years-old Egyptian worker in Italy’s construction sector, told DNE that being in the streets now requires an official permission from the police, noting that “three Egyptians were arrested last weekend as they walked down in a public square without an official permission.”

“The situation here is incredible. Many of the Egyptian workers have been forced to leave their jobs because companies can’t continue working normally in these abnormal conditions with the spread of the COVID-19,” Said said.

Italians are singing from behind closed doors in their windows to boost morale. “I saw many Italians who are afraid to get out their heads out of windows as the outbreak is very rapid and unexpected,” he said.

Italy has always been a good and safe country, he said, adding that it’s the first time for such friendly country to be the epicentre of a global disease specially that the world has already witnessed many diseases like the Avian influenza A (H5N1) and severe acute respiratory syndrome (SARS), yet such terrifying conditions are unprecedented.

On 13 March, Head of the World Health Organization (WHO) Tedros Adhanom Ghebreyesus said Europe is now the “epicentre” of the global coronavirus pandemic with more reported cases and deaths than the rest of the world combined, urging countries to use aggressive measures, community mobilisation, and social distancing to save lives.

“I have filled out a form signed by my employer and approved by the Italian authorities referring that I can be in the street for half an hour in the morning and same period of time in the evening in order to be allowed to go work and get back to home every day except the weekends,” Said elaborated.

last Friday, Said’s employer, which is an American company in Italy, asked him to take all his personal belongings as the company will sterilise the building on Saturday and Sunday, then they told the employees that they aren’t sure if they can resume work on Monday, due to the virus outbreak.

If someone feels sick, he can’t just go to the hospital, he has to call the hospital then they come to his house and pick him up, Said said. “It’s forbidden to be close to someone. You have to keep two-metre distance. Even in supermarkets, it’s a long line with two-metre distance between each one, while only five persons are allowed to enter the supermarket at once.”

Egyptian expats should return home likewise those in China

Another expat, who refused to reveal his identity, said he can’t renew his residence, as all the governmental authorities are closed.

“I can’t renew my residence neither personal or online. I have to wait here. I asked about the flight tickets and they more than doubled the prices in one week. The flight ticket to Cairo was about €300 and it is now €800,” he mentioned.

“Till now, EgyptAir is operating in Italy. I wish we can return home before they suspend flights to Italy,” he added, calling on the Egyptian authorities to take extraordinary measures to help the Egyptians in Italy to return to Egypt like they did for those in China.

On 17 February, Egypt has ended a 14-day quarantine for hundreds of Egyptian citizens who had returned home from the Chinese city of Wuhan, the past epicentre of the coronavirus, Health Minister Hala Zayed said. The announcement came two weeks after Egypt sent a special jet to bring back hundreds of Egyptian nationals from Wuhan.

The restrictions, which began last Friday, and are set to last 30 days, do not currently apply to US citizens or to travellers from the UK or Ireland.

The US president announced a state of emergency last Friday to combat the coronavirus pandemic, freeing up billions of dollars in funding and promising a screening website and drive-through tests.

Online study is good, yet mothers stuck at homes

Asmaa Mohamed, a 28-year-old wife in Italy, said the Italian government took precautionary measures and suspended schools and universities, and turned the study into online.

“My child receives his education online now. It’s good to prevent the speed of the COVID-19, yet we’re stuck at homes and can’t even spend time in parks or streets. Our lives have dramatically changed,” she mentioned.

“The problem is that the situation is not clear at all. We don’t know how long this situation will continue or how long can we adapt these conditions,” she said.

Egypt’s Prime Minister Moustafa Madbouly announced on Saturday that COVID-19 diagnosed cases in Egypt reached 110, adding that the number of cases in Egypt isn’t high comparing to other countries in the world.

Madbouly added that seven COVID-19 cases were detected in schools, so the authorities decided to suspend schools and universities for two weeks. Moreover, President Abdel Fattah Al-Sisi announced EGP 100bn emergency fund on Saturday. It will be used to combat COVID-19 and cushion impacts on the Egyptian economy.

Last week, a 60-year-old Egyptian woman became the second person to succumb to COVID-19. She was from Dakhalia governorate, and was admitted to Al Mansoura hospital where she tested positive for coronavirus. She was immediately transformed to quarantine although she succumbed due to health complications, namely acute pneumonia, making her the first Egyptian death in the country.

Earlier this month, Egypt confirmed the first fatality due to the coronavirus in the country for a German citizen. A hotline 105 has been created to receive citizens’ inquiries regarding the virus as well as report potential acquisition.

Last week, the City International School at Cairo’s Zamalek neighbourhood has been closed after a parent of one of the students was in contact with a foreigner who tested positive for COVID-19. The father was diagnosed likewise and transmitted the disease to his son.

The Education Ministry said that school students, teachers, and headmasters were required to self-isolate for 14 days.

After declaring the outbreak an international health emergency in January, the WHO updated the global risk level to “very high” last month.

Notably, Al-Sisi called Conte last Wednesday to express solidarity with Italy against the COVID-19 outbreak. Al-Sisi stressed Egypt’s full readiness to extend to Italy possible support and assistance in their fight against COVID-19. The Italian PM expressed his gratitude for the Egyptian position supporting Italy in this crisis.

Social life at risk as fears raise over Coronavirus spread

FX is not only indicator for assessing economy: Arqam Capital