The Grand Ethiopian Renaissance Dam (GERD) on the Nile River meant to turn Addis Ababa into Africa’s biggest power exporter, but Egypt fears the dam, which is under construction near Ethiopia’s border with Sudan, would significantly diminish its water supply from the Nile, its major source of freshwater.

Although the trilateral negotiations on the GERD had stalled after Ethiopia rejected the US-brokered agreement, Egypt kept pursuing the diplomatic route to protect its water rights in the Nile River.

Tensions between Cairo and Addis Ababa escalated recently after Ethiopia did not attend the last US-sponsored meeting with Egypt and Sudan in Washington to sign the final agreement over the rules of filling and operating the GERD. The agreement, which was drafted by the US, was initiated by Egypt, but not signed by Sudan or Ethiopia.

Egyptian community in the US organised a demonstration in front of the White House on Sunday to support Egypt’s stance in the GERD talks. The Egyptian expats were demanding support and respect for Egypt’s rights to the Nile water. They also launched an online campaign for protecting Egypt’s Nile water rights supported by a report on the possible impacts of the GERD on Egypt.

During the past week, Egypt’s Minister of Foreign Affairs Sameh Shoukry toured seven Arab capitals, including five Gulf countries, Jordan, and Iraq, to discuss the developments of GERD talks.

The tour came a week after the Arab League adopted, during a meeting of Arab foreign ministers, a resolution submitted by Egypt to protect its rights to the Nile water and to castigate Ethiopia for failing to reach an agreement with Egypt and Sudan on the filling and operation of the GERD.

On 15 March, Shoukry said in a televised interview that negotiations between Egypt and Ethiopia have completely stalled, and that Addis Ababa spread fallacies in the media. He noted that these actions do not show intention for peaceful negotiations or cooperation.

Shoukry also met various African ambassadors to Egypt last week where they reviewed Egypt’s achievements during its presidency of the African Union (AU) in 2019, in addition to the latest developments on the GERD and Egypt’s efforts to reach a fair and balanced agreement for the three parties concerned.

“Communications are suspended with Ethiopia, but we are in permanent contact with our Arab partners and brothers, as well as the United States of America, the sponsor of the negotiations, which put the agreement together,” Shoukry said.

Shoukry pointed out that his latest international trip came with the aim of delivering messages from Egyptian President Abdel Fattah Al-Sisi to other Arab leaders, European Commission President Ursula von der Leyen, and French President Emmanuel Macron on the path of GERD negotiations. There is an understanding among European Union countries on the danger of Ethiopian “intransigence” in negotiations and the repercussions it may bring that lead to an escalation of tension in the Horn of Africa, he added. 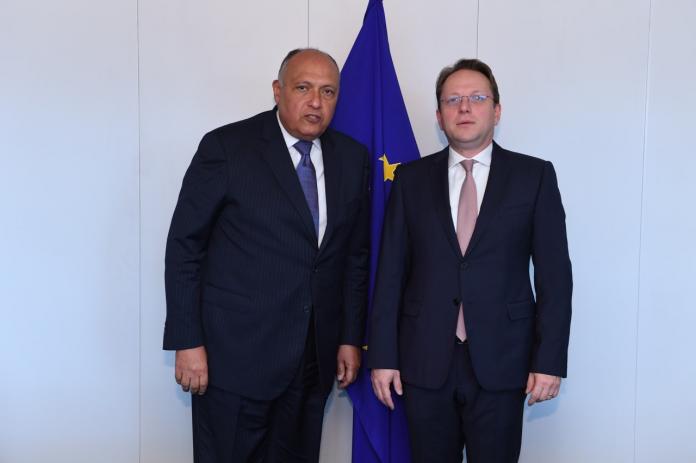 Shoukry indicated that he expects an Arab move to discourage the Ethiopian side from this “intransigence” and bring the negotiations out of a dead end, “as a vivid indication of solidarity, common interest and the historical relationship that binds us.” He stressed that “Egypt’s position is fair and its people deserve reaching results protecting their water interests.”

Meanwhile, a delegation from the Egyptian foreign ministry, led by Assistant Minister for Arab Affairs Yasser Othman, visited Algeria, Tunisia, and Mauritania and handed the leaders of the three countries official letters from President Al-Sisi on the GERD issue, according to a statement by the foreign ministry said on Sunday. The messages outlined Egypt’s position on the Ethiopian hydro-power project

Also on Sunday, Al-Sisi met Deputy Head of Sudan’s Sovereignty Council Mohamed Hamdan Dagalo in Cairo, where they both discussed developments in negotiations over Ethiopia’s disputed dam project, the Egyptian presidency said in a statement.

The Sudanese official said his country would mediate a deal on the escalating dispute between Ethiopia and Egypt, Washington Post reported.

Dagalo said his country would work to bridge the gap and “reach an agreement” in the years-long GERD dispute.

One day before this, President Al-Sisi and Head of the Sovereign Council of Sudan Abdel Fattah El-Burhan discussed bilateral relations over phone, the Egyptian presidency said.

Notably, Sudan had refused to endorse an Arab League resolution supporting Egypt in its dispute with Ethiopia over the GERD.

While Egypt’s local and international momentum to defend its water rights within the GERD takes off, Ethiopia announced drafting its own proposal on how to resolve the standoff, which will soon be presented to Egypt and Sudan, said Ethiopia’s Foreign Minister Gedu Andargachew in an interview with The Associated Press on 13 March.

He also said that the three countries need to resolve their differences without outside pressure, as “Ethiopia refuses to be pressured by the US into signing a deal with Egypt and Sudan over the dam. We won’t subscribe to an agreement just because the US and the World Bank came forward with it. We need to take time and sort out sticking points.”

He claimed that his country has been pressured to quickly reach an agreement and sign a deal before resolving outstanding issues during talks held in Washington in recent months. 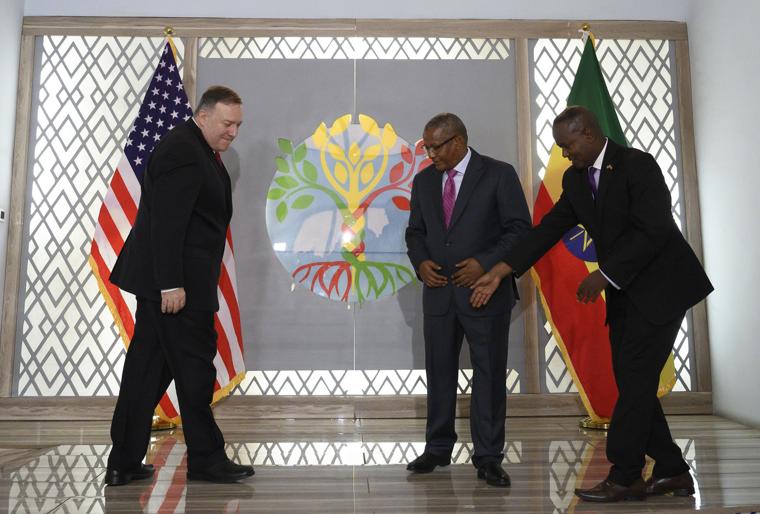 “Then US officials drafted and sent us an agreement, which we also opposed because the US only has an observer status,” he said. “We are of the opinion that an agreement reached under pressure is not in the best interest of any party in the talks.”

On 3 March, US President Donald Trump told his Egyptian counterpart Al-Sisi that Washington will keep up efforts for a deal among Egypt, Ethiopia, and Sudan over the dam Ethiopia is building on the Nile, Egypt’s presidency said.

In another interview with Al-Jazeera, Andargachew commented on several points regarding the issue, including the Arab League’s position.

“Ethiopia has strong ties with the Arabs as it was Islam’s gateway to Africa. These ties will not be harmed,” Andargachew said. However, the Arab League should not have issued such a resolution, especially that it is a regional institution, which should work on promoting peace among the member states and the Middle East, especially in light of the current crises facing many countries like Syria, Libya, and Yemen, he added.

Regarding Egyptian rejection for Ethiopian commencing its dam filling, he said that Ethiopia will store water in the rainy season in July and August to produce electricity and that the dam’s construction will be completed according to the fixed schedule. The Ethiopian minister added that Egypt bears the full responsibility of hampering negotiations and involving external parties in the negotiations.

He also denied that the dam will harm downstream countries and that these claims were baseless and “just propaganda.”

Regarding the possibility of a war between Egypt and Ethiopia, Andargachew said that “No war will be declared because of the dam or the Nile.” The Nile has gifted the people of the three countries life and is considered the lifeblood of the Nile Basin countries.

Andargachew said that Ethiopia has already submitted the dam’s design to Egypt and Sudan, but there are media campaigns in Egypt that twist facts and mislead the public opinion in Egypt, convincing them that they will die of thirst. Egypt’s negligence of Ethiopia’s need to develop and combat poverty is “inhuman.”

Regarding pre-election pressures in Ethiopia, he said the dam is bigger than the elections and that it is a national issue. Political parties may differ in politics, but they all agree on the dam since it is a national project.

“No one will prevent us from filling the dam,” he stressed, criticising the role of the US Treasury as it turned from a supervisor into a mediator, he claimed. “The US supervision was the request of Egypt and Ethiopia in hopes of reaching a solution, but the role has turned from supervision into mediation. If the US wants to resume its role as just a supervisor, we welcome this.”

Last week, Egypt’s Ministry of Water Resources and Irrigation Mohamed Abdel Ati said Cairo has denounced Ethiopia’s announcement to start filling the GERD in June in parallel with building the dam, especially since there are still technical issues in its construction that need further studies.

He added that 2bn cubic metres of water, in principle, will not help Ethiopia generate the amount of electricity required.

Egyptians can never give up on their water rights, he stressed.

Abdel Ati said Egypt is the most efficient country in using the Nile water. “Egypt recycles 20bn cubic metres of the Nile water every year to cover its growing needs.”

Moreover, Egypt is working on different fronts to rationalise water resources as the government will invest as much as EGP 100m in enhancing water resources in the next 10 years, and that, currently, the government is building dams, lakes, reservoirs, and desalination stations to save as much water as possible.

He noted that the US-drafted agreement was “fair and balanced” and it “achieved the interest of the three countries.”