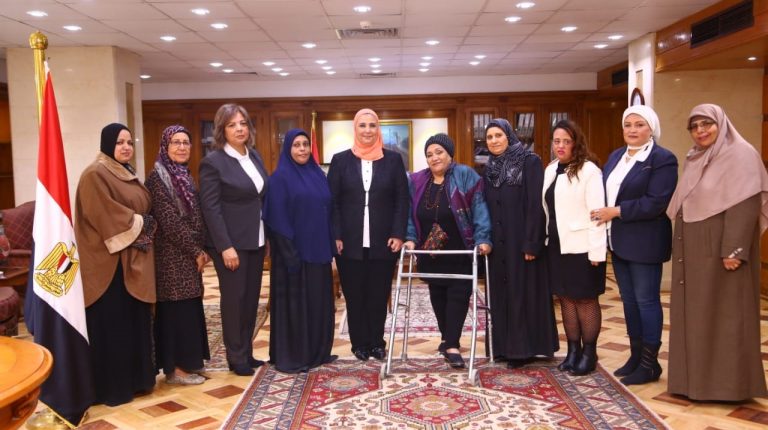 Saturday 21 March will mark the Mother’s Day. On this special occasion, Egypt has a tradition to honor ideal mothers to appreciate their roles in family and community.

The Ministry of Social Solidarity announced on Tuesday the 32 ideal mothers, including a mother with disability and a mother of a son with special needs from across Egypt.

Minister of Social Solidarity Nevine El-Kabbaj said during the ceremony that the winning mothers were selected from 762 mothers who participated in the contest. A total 404 mothers met the competition’s criteria.

El-Kabbaj explained that the 2020 criteria stipulate that mother should consolidate human values among her family and promote the value of family. She also should maintain the cohesion and interdependence of her family. The ideal mother has to keep balance between her responsibilities, promote positive values to her children, and take good care of them.

The ideal mother should be more than 50 years old as of December 2019. She has to be literate with no more than three children, with the exception of border provinces (Red Sea, Sinai, Matrouh, New Valley, and Aswan) where applicants should have no more than five children, and those children must be university graduates or students.

At the end of her speech, El-Kabbaj stressed that the ministry will not hold any activities that require gatherings in light of the government’s precautionary measures to curb the spread of the COVID-19.

Daily News Egypt met the first Egyptian ideal mother in 2020 to tell us about her motherhood journey.

Amina Rashed, a 71-year-old widowed woman from Damietta, told Daily News Egypt that she used to work as a nurse before retirement.

“I used to work as a nurse at a hospital where I met my husband who was a doctor. We got married and got three children. We had a happy life until the turning point 32 years ago when my husband died suddenly due to a heart attack, leaving behind three daughters, the eldest was 6 years old and another 4 years old, while I was pregnant with my third daughter,” Rashed said.

She added that after her husband’s death, she faced a lot of obstacles, but she did not give up. She fought for her family and continued to work as a nurse to raise her children.

“I wanted my daughters to have a better life than mine, and thanks God they are now,” she said, trying to smile though tears were in her eyes.

“School leaving was not an option for my daughters, and I did not want to marry again,” she stressed.

The eldest and youngest daughters got married, and the mother over years won many certificates of appreciation through her participation in the social work.

Rashed`s story is one of many others of Egyptian women who raised their children and devoted their lives for this goal. The Mother’s Day is a special occasion to honour all those women who could support their children despite all the obstacles they faced.

Egypt was the first country to celebrate Mother’s Day in the Arab world, with all Arab countries soon following suit.

The idea of the day was originated by sibling journalists Ali and Mostafa Amin, the founders of Akhbar Al-Youm newspaper, as the former received a letter from a mother complaining of ill-treatment from her children.

Another mother visited Mostafa Amin at the time in his office and told him about her story of becoming a widow, and subsequently devoting her life to her children by not remarrying. She became like a father and mother at the same time to her children, until they were graduated from university and got married. However, they currently only visit her occasionally, she complained.

This prompted Ali Amin to write, in his famous column ‘Fekra’ (Idea), an article suggesting a special day to celebrate mothers.

His idea gained popularity, and his column’s readers began suggesting dates to mark the occasion. Accordingly, 21 March was selected as a day to celebrate motherhood throughout the nation, as it signals the beginning of spring.

It was celebrated for the first time in Egypt in 1956, during the era of the late Egyptian President Gamal Abdel Nasser, and the Arab world later adopted the idea of celebrating Mother’s Day.

That’s not your mother, it’s a MAN, baby!