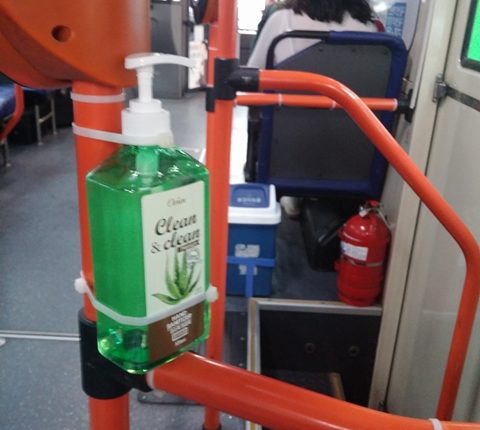 Like many countries around the globe, South Korea is fighting against the coronavirus disease (COVID-19), gaining the world’s praise for its successful efforts in containing the virus and protecting its citizens and foreign residents.

South Korea has reported 8,799 COVID-19 infections and 102 deaths until Saturday, ranking eighth globally in terms of the number of infections, according to the worldometer which provides updated statistics on coronavirus infections worldwide.

The story begins on 8 December 2019 when the first case of the novel coronavirus was detected in Wuhan, China, amid a state of ambiguity about the new disease, Ammar said.

In the New Year, a state of panic began in Wuhan and the Chinese authorities ordered the lockdown of the city, which hosts a large seafood market which some thought it was the source of the epidemic, yet the virus spread beyond the borders.

On 20 January, the first case of the coronavirus was announced in South Korea for a woman coming from Wuhan. She was suspected of carrying the virus upon her arrival at Incheon International Airport, Ammar said, noting that South Korea remained calm for a few days as the number of infected people did not exceed four at the time.

On 19 February, South Korea reported mass infection in the city of Daegu, especially among members of the Church of Shincheonji, but the measures South Korea has taken to mitigate the spread of the disease in that period were the reasons behind its success against the coronavirus.

The authorities launched awareness campaigns in public places and transportation. Signs and audio messages were circulated in public transportations to inform people to take precautionary measures against the virus or what to do in the event of the appearance of any related symptoms.

The authorities also provided free masks and hand sanitisers in buses and metro stations, so that people can protect themselves and those around them in public places. There is no alternative to going to work and practicing daily life.

South Korea is one of the countries that have adopted a prudent policy of prompt and accurate testing of infected individuals or those who have had direct or indirect contact with patients to reduce the spread of the disease, Ammar said.

The government examines 15,000-25,000 people daily to provide sound and accurate data on the affected sites, so that individuals can avoid infection, he added.

After the wide spread of the virus, most universities made the decision to close gyms, cafeterias, and libraries, and to postpone the study. They provided e-lectures to limit the chance of people gathering, he elaborated.

Universities sent messages and e-mails to inform students returning from abroad to adhere to the self-quarantine and provided financial support for them in this period, he said. Universities even paid taxi fares for students from airports to their residencies to limit public contact upon entering the country.

“I, as a student, live in the university dormitory and regularly receive awareness messages about wearing a face mask when leaving my room. Students in the campus get their temperature measured periodically,” Ammar mentioned.

The South Korean government recently adopted a new system for subsidising face masks in pharmacies; every citizen or foreigner residing in South Korea who has health insurance has the right to purchase two masks per week. This comes as part of the state’s efforts to provide masks for citizens at affordable prices, in addition to reducing the long lines in front of pharmacies to buy masks.

The state divided the citizens into categories according to the last number of their year of birth. For example: a person whose year of birth ends with 7 or 2 can buy a mask on Tuesday by showing their ID or registration card. The face mask costs ₩1,500 (EGP 20).