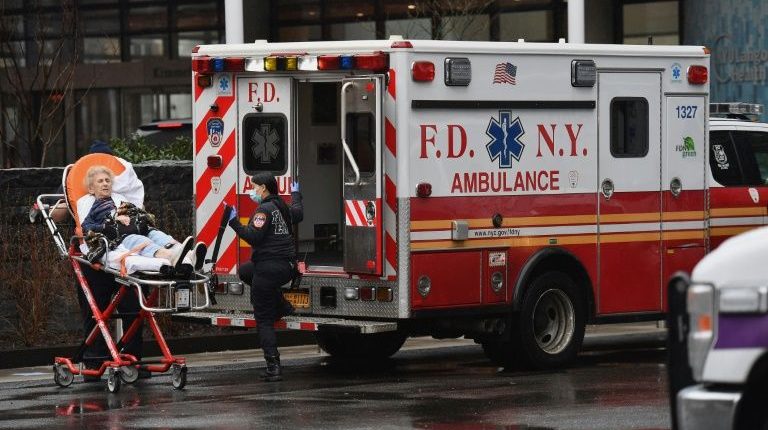 With more than 25,000 positive tests and 210 deaths, New York has become the epicentre of coronavirus cases in the United States.

The number of New Yorkers that have died due to complications with the virus jumped. At least 2,850 people are now hospitalised because of the virus with 660 of those patients in Intensive Care Units.

Governor Andrew Cuomo announced Tuesday morning that there are now 25,665 cases of deadly virus in New York state resulting in 210 deaths with just over 60 percent of cases concentrated in New York City.

Cuomo said Tuesday that the number of coronavirus cases is doubling every three days and that the city and state was failing at “flattening the curve” and that the number of infected New Yorkers would reach its apex between 14 and 21 days — right around the time President Donald Trump wants to have the country “open up” and reassess self-quarantine policies.

He said New York needs 30,000 more ventilators on top of the 7,000 it has. Cuomo wants all of what he called a current federal stockpile of 20,000 ventilators to brace for the coming “apex” in cases, which he says will arrive in as soon as 14 days.

“(After) we get over that curve … I’ll send ventilators, I’ll send health care workers … around the country.”

The governor said his state was trying to address two other needs: more hospital beds and more medical staff. He said the state needed 140,000 hospital beds for an anticipated patient apex in as soon as two weeks, yet the state now has only 53,000 beds. Cuomo said he was speaking to hotel owners “about taking over their hotels” to place some patients.

“I will turn this state upside down to get the number of beds that we need,” he said.

About 1,000 beds are being set up in Manhattan’s Javits Convention Center. Those beds generally will be for noncritical overflow patients, freeing up intensive care units in hospitals, Cuomo said.

His  comments come as general stay-at-home orders — intended to slow the spread of the disease so medical professionals can better handle incoming cases — will be in effect in at least 17 states by Wednesday.

While Trump has expressed a desire to soon transition away from social distancing to help the economy, public health experts and physicians are generally urging they stay in place longer, as cases are nearly overwhelming health care systems in New York City and other areas.

“The (distancing) we have put in place over the last eight days … you won’t see the impact of that for at least another seven or 14 days,” said Birx, the White House coronavirus response coordinator, on NBC’s “Today” show.

White House aides are scrambling to find a compromise option. Discussions include a phased system in which younger people — potentially under 40, according to one option — return to the workplace or business first, followed gradually by people slightly older until most of the country is back to normal, officials say.

Last week, the White House released guidelines urging Americans to avoid eating at bars or restaurants and skip out on gatherings with more than 10 people for the rest of March.

Health officials have said a lack of firm federal direction and residents ignoring social distancing guidelines could result in more sharp increases of cases and hospitalisations that will overwhelm the country’s health system.

Trump, who faces reelection in November and is keen to avoid extended economic damage — told reporters he would be “opening up our country to business because our country was meant to be open.”

With millions of residents ordered to stay home and non-essential businesses and schools closed, the city that never sleeps is bedding down for an uncertain slumber.