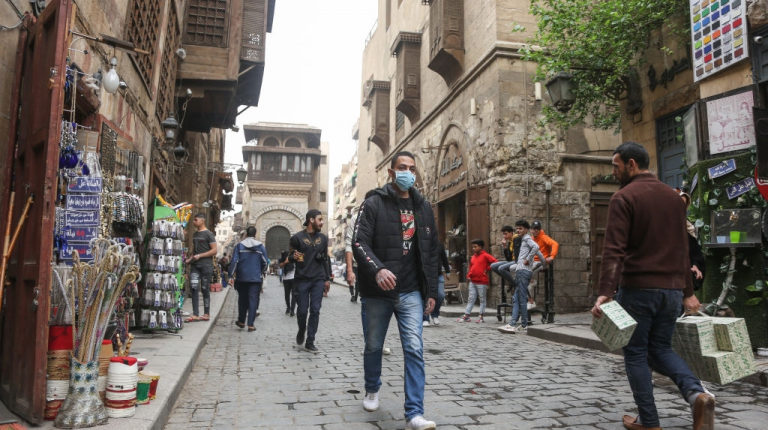 President Abdel Fattah Al-Sisi ordered, on Sunday, to increase allowances of medical professionals by 75%, and to issue a bounce to personnel working in public hospitals.

During a meeting with the cabinet, the president offered his appreciation to medical service providers in the Egypt, describing them as spearhead to the state’s efforts in countering the spread coronavirus.

The president also directed the need to enhance local manufacturing of medical equipment.

Meanwhile, several villages in about 10 governorates across Egypt have been placed under lockdown after coronavirus infections were detected, said Ministry of Health and Population spokesperson Khaled Megahed.

In televised remarks on Saturday to the Al Hadath’s Cairo Now talkshow, Megahed said, “Some villages in around 8 or 10 governates were put under lockdown, including two villages in Minya.”

Megahed said the measures were taken to curb the spread of coronavirus in those villages after some of their residents contracted the virus and infected others.

Although Megahed has not revealed where the other villages are located, he said in earlier statements that the pandemic has spread across 24 governorates.

Minya’s Directorate of Health began to isolate the residents of two villages in Bani Mazaron Saturday, as part of the ministry’s precautionary measures against coronavirus.

On Sunday, the Health Ministry announced 30 new coronavirus infections and 4 deaths. The latest figure brings the country’s total to 609 infections, with 132 recoveries and 40 deaths.

On Saturday Egypt reported 40 infections, including 39 Egyptians and a Jordanian citizen.

As part of efforts to combat the spread of coronavirus, Egypt’s Minister of Awqaf (Religious Endowments) indefinitely extended the suspension of daily prayers and weekly Friday prayers in all mosques.

Church masses and all activities, except for funerals with limited numbers of attendees, have already been suspended.

Head of World Health Organization Tedros Adhanom Ghebreyesus, on Saturday, said the coronavirus has now spread to dozens of countries across Africa, with 2,650 confirmed cases and 49 deaths.