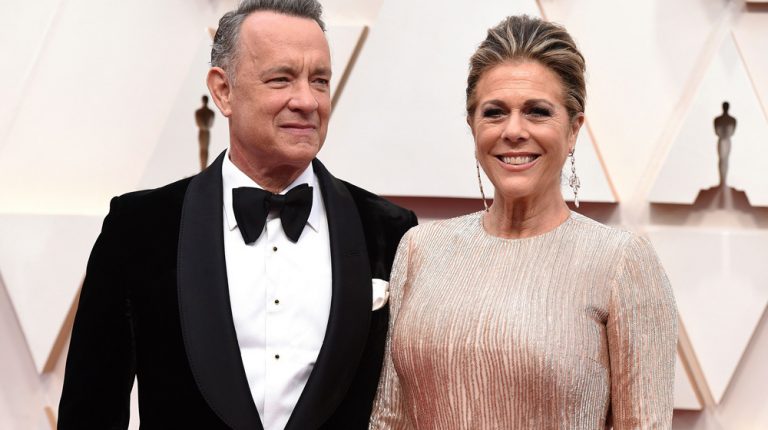 In efforts to curb the spread of coronavirus (COVID-19) worldwide, entertainment events have been cancelled and sports competitions have been put on hold. However, the numbers of infections among celebrities are still rising, with many put under quarantine or self-isolation at home.

Tom Hanks was Hollywood’s first confirmed high-profile case in the outbreak on 11 March, as the American actor announced that he and his wife, Rita Wilson, had contracted coronavirus while travelling in Australia. Since then, dozens of public figures have been diagnosed with the virus.

As the novel virus spreads fast, tragically, the death toll also continues to rise. Here are all the celebrities who have tested positive for coronavirus so far.

The veteran actor Tom Hanks shared on Twitter that he and his wife, actress and singer Rita Wilson, tested positive for coronavirus whilst in Australia. The diagnosis comes as he was preparing to shoot a new film entitled Elvis. He and his wife started to feel flu-like symptoms before testing positive for the virus. According to a 28 March report from E and People magazines, the couple has returned to Los Angeles following their recovery.

On 15 March, Ukraine-born French actress and model Olga Kurylenko tested positive for the virus. Kurylenko, who starred in the 2008 James Bond film Quantum of Solace, announced her positive diagnosis via Instagram, urging her followers to take the virus seriously.

On 16 March, British actor Idris Elban announced his positive diagnosis via Twitter, explaining that he remains asymptomatic. He added that he decided to go for testing after discovering he was exposed to someone who had been diagnosed with the virus.

On 16 March, Norwegian actor Kristofer Hivju said he had tested positive for the virus, sharing a photo on Instagram to announce the news. Hivju, best known for his role on HBO’s Game of Thrones, is self-isolating at home with mild symptoms.

On 16 March, actress Rachel Matthews, who voiced the character of Honeymaren in Frozen 2, said she tested positive for coronavirus. She had been in self-quarantine for several days.

On 19 March, the Lost and Hawaii Five-0 actor announced his coronavirus diagnosis, and that he is currently in self-isolation at his home in Hawaii.

The world famous Spanish opera singer announced his own coronavirus diagnosis via Facebook, and that he had been hospitalised in Acapulco, Mexico days later.

On 23 March, the German singer and television presenter Natalie Horner announced on Instagram that she tested positive for coronavirus. “My case will most likely be mild, so the most important thing is to protect everyone else who may be at risk,” she said.

Coronavirus has also had a significant impact on the global sports community. Many athletes have also tested positive for the rapidly spreading virus, leaving sports associations worldwide with no choice but to halt all sports events. Here are the most prominent athletes who have tested positive for coronavirus.

The French professional basketball player, who currently plays for the NBA’s Utah Jazz, became the first NBA player to catch coronavirus on 11 March.

Arteta, Arsenal Football Club’s Spanish head coach, was diagnosed with the virus on 12 March. He was the first in England’s football League to test positive for coronavirus.

The Colombian professional road and track racing cyclist announced on Instagram that he had tested positive for coronavirus on 12 March.  He went down with the virus after racing for Team Emirates as part of the UAE Tour.

The Russian professional racing cyclist, who currently rides for UCI ProTeam Gazprom–RusVelo was confirmed to have the virus on 12 March. He was also diagnosed after participating in the UAE Tour.

Matuidi and Rugani are the first and second players from the Italian soccer team Juventus to test positive for coronavirus on 11 and 17 March respectively.

Floyd Cardoz, a 59-year-old Celebrity chef who won “Top Chef Masters”, died on 25 March after his coronavirus diagnosis. He had been feeling unwell for about a week since returning from a trip to his native India.

David Edwards and Lee Green, both of whom were star American college basketball players in the 1990s, both died on 23 March, reportedly of coronavirus.

The 86-year-old Cameroonian saxophonist, Manu Dibango, died on 24 March in Paris. He was best-known for his 1972 hit “Soul Makossa”.

Terrence McNally, the legendary playwright and screenwriter, died at 81 on 24 March from coronavirus-related complications. He had chronic obstructive pulmonary disease and had also survived lung cancer.

Mark Blum, a 69-years-old stage, film and TV actor, best known for his role in the Crocodile Dundee films, died on 26 March from complications from coronavirus.