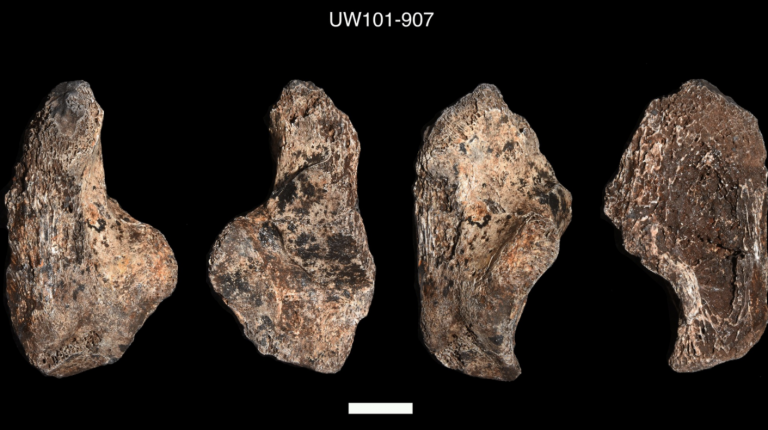 The skeleton was found in 2013 in the Rising Star Cave System’s Dinaledi Chamber, according to a study published on Tuesday in the PLOS ONE journal.

The fossilised remains of the new hominin species represent a collection of several individuals who lay buried 30 metres underground. They lay undisturbed until recreational cavers accidentally stumbled on them.

Debra Bolter, of Modesto Junior College in California and Johannesburg’s University of the Witwatersrand, and one of the study’s authors, saidm “In this article, we name the partial juvenile skeleton DH 7, which stand for Dinaledi Hominin 7. DH 1-6 specimens are all adults, and are represented by only cranio-dental remains. DH 7 includes the first association of skeletal elements with dentition from the 2013-2014 excavation, and includes skeletal remains never before discovered as immature elements in the sub-equatorial early hominin fossil record.”

She explained that there are very few pre-adult skeletons in the fossil record. The ability to associate the remains of an older juvenile H. naledi is a major break-through in paleoanthropology. The juvenile’s remains, in particular, are critical for understanding how an extinct species matured.

Partial skeletons reveal the combination of baby and adult teeth, and the timing of their eruptions with the skeletal fusion of growth plates in the long bones and pelvis of the body. Scientists use comparisons with the patterns seen in extinct species to reconstruct selective pressures and changes in our own species’ developmental processes.

Bolter added, “We used forensic anthropology and taphonomic techniques to evaluate the immature materials recovered from the 2013-2014 excavation season. For each of the 76 fossil bones specimens, we assessed several criteria, including duplication of elements, developmental stage, size, spatial proximity, refitting of specimens into single element and the anatomical position of each fossil.”

According to the author, the study provides one of the few partial skeletons of an extinct hominin, and it gives paleoanthropology a foundation to assess maturity patterns in a species that has recently gone extinct.  It may help scientists understand the factors that selected for such a long developmental period in our own species.