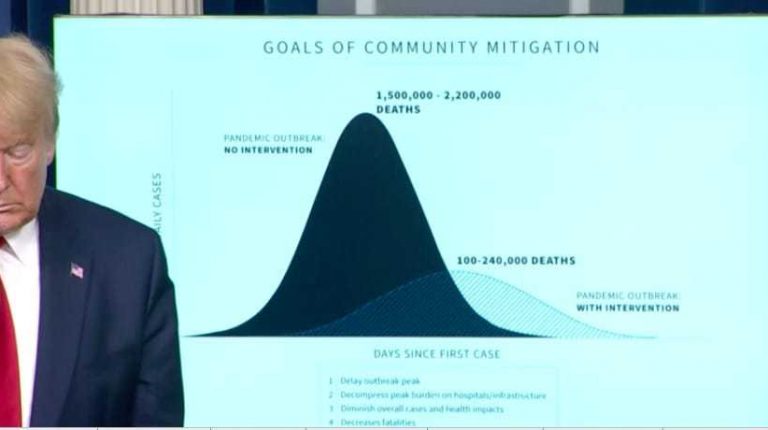 President Donald Trump warned his countrymen on Tuesday of a “painful” two weeks ahead in the fight against the novel coronavirus (COVID-19).

Trump’s comments come in light of the mounting US death toll, that could stretch into the hundreds of thousands even with strict social distancing measures.

Trump urged the population to heed guidance on limiting groups to no more than 10 people, working from home and to stop going to restaurants and bars.

“It’s absolutely critical for the American people to follow the guidelines for the next 30 days. It’s a matter of life and death,” Trump said.

White House coronavirus coordinator, Deborah Birx, displayed charts demonstrating data and modelling that showed an enormous jump in coronavirus-related deaths to a range of 100,000 to 240,000 in the coming months.

That figure was predicated on Americans following mitigation efforts. One of Birx’s charts showed as many as 2.2 million people projected to die without such measures, a statistic that prompted Trump to ditch a plan he articulated last week to get the US economy moving again by Easter on 12 April.

The president said the next two weeks would be “very, very painful”. The modelling showed the number of deaths across the nation would escalate and peak roughly around mid-April.

“We want Americans to be prepared for the hard days that lie ahead,” Trump said, predicting light at the end of the tunnel after that.

The US government is currently racing to build hundreds of makeshift hospitals near major cities as healthcare systems were pushed to capacity by the coronavirus pandemic.

Nearly half of the new fatalities were in New York state, the pandemic’s epicentre despite closed businesses and deserted streets. New York City Mayor, Bill de Blasio, pleaded for immediate reinforcements from the Trump Administration in the country’s biggest city.

“This is the point at which we must be prepared for next week when we expect a huge increase in the number of cases. What I asked very clearly, last week, was for military medical personnel to be deployed here,” de Blasio said at the Billie Jean King National Tennis Center in Queens, where a field hospital was being hastily built.

Nearly 4,394 people in the US have already died from the coronavirus, a higher figure than those who died in the 11 September attacks in 2001. The total number of confirmed infections in the US rose to 200,269.