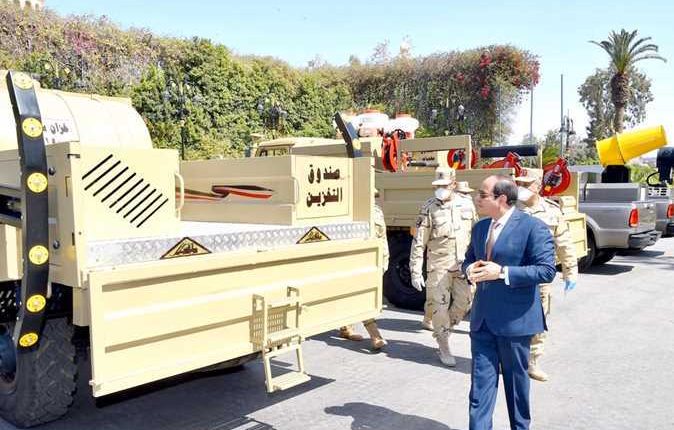 Egypt recorded on Sunday 103 coronavirus (Coid-19) cases and 7 new deaths, bringing the country’s total to 1,173 cases and 78 deaths, according to the Ministry of Health on Sunday. The ministry said 247 cases recovered and left hospitals.

Khaled Magehad, the Ministry’s official spokesperson, said the number of cases whose laboratory results have changed from positive to negative for coronavirus has increased to 346 cases, including the recovered ones.

The ministry stated in another statement on Sunday that it received 477,257 inquiries from citizens in March about the coronavirus pandemic through its 105 and 15335 hotlines.

Meanwhile, President Abdel Fattah Al-Sisi inspected on Sunday Armed Forces’ preparations and the equipment they developed for curbing the spread of the coronavirus (Covid-19).

The unit’s work included most public areas across Cairo, including Ramses Square, Egypt’s railway station, as well as Al-Fateh Mosque and its surroundings. Other areas around the city centre, including Ramses streets, Sabbatieh, Faggala, and Al-Torgoman, have been included in the programme.

In recent weeks, the Egyptian army has undertaken a series of measures against the further spread of the coronavirus, such as storing food items and providing training on preventive measures.

On Sunday, the last extraordinary EgyptAir flight, carrying 315 adults and 16 infants, from Washington arrived at Marsa Alam International Airport. The passengers had been stranded in the US capital due to the coronavirus outbreak. The repatriation of Egyptian nationals from abroad continues despite ordinary commercial flights remaining suspended at all Egyptian airports until April 15.

Over 1.19 million coronavirus infections have been confirmed worldwide, with a reported 64,421 dead, according to Reuters. Infections have been reported in over 200 countries and territories since the first cases were identified in China in December 2019.