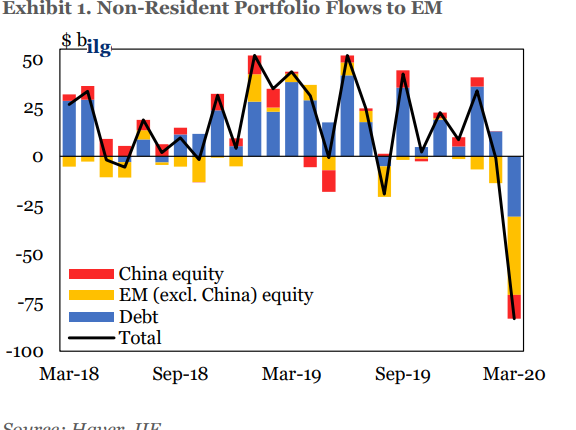 Emerging markets (EM) securities suffered a record-breaking outflow of roughly $83.3bn in outflows in March, according to the latest report by the Institute of International Finance (IIF).

The IIF attributed the outflow to the dramatic collapse of flows in equities and debt instruments, adding that the impact of the ongoing coronavirus (COVID-19) pandemic has played a notable role.

The downturn is significantly larger than events of the 2008 global financial crisis, and dwarfs stress events, including the 2015 China devaluation scare and 2013 taper tantrum in 2013, the IIF added.

The IIF said that the increasing spread of the novel coronavirus (COVID-19) in recent weeks has rattled markets. This in turn has created a shock more severe to EM than the 2008 global financial crisis, as far as capital flows are concerned.

The IIF also said that debt outflows recorded $31.0bn in March, the second-largest monthly outflow on record, with the largest occurring in October 2008.

“On the equity side, the negative trend which was observed last month deepened, with outflows totaling $52.4bn, in which outflows from China equities amounting to $12.3bn and flows to the remaining EM equity universe reaching -$40.1bn, the highest since we began publishing our trackers,” the IIF noted.

The IIF revealed that the notable decrease in debt flows was broad-based, with EM Asia experiencing the largest outflows going from inflows of $4.5bn in February to outflows of $19.5bn in March.

The IIF also mentioned that the EM Asia region also saw the most noticeable outflow for equities. Such flows went from -$5.5bn in February to -$35.9bn in March.

“Unlike in January and early February, when most of the outflows were contained to EM Asia, this reading shows universal record-breaking outflows across EM regions,” the IIF said.

The IIF found out that bet flows virtually ground to a halt across EM, with a reading of only $0.2bn in February.