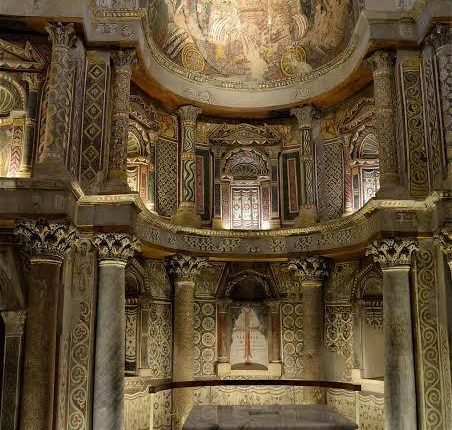 The Ministry of Tourism and Antiquities launched its third virtual tour via its website and social media platforms on Sunday. This tour was in Sohag’s Red Monaster.

Monday’s virtual tour will be at the Mosque and Madrassa (School) of Sultan Barquq in Al-Muiz Street, while the Ben Ezra Jewish Synagogue in Old Cairo will fill Tuesday’s slot.

The tours come as part of a Ministry of Tourism and Antiquities initiative, launched in collaboration with its scientific and archaeological partners. The virtual tours allow viewers worldwide to enjoy Egypt’s ancient civilization from the comfort of their homes and within the precautionary measures taken to fight the ongoing coronavirus (COVID-19) pandemic.  The tours will be posted on the ministry’s official website and social media platforms, as well as the Experience Egypt website.

The Red Monastery is located 21km west of Sohag, and is considered one of the most important monasteries of Christianity’s early history. Because of the red bricks that make up most of its masonry, it is known as the Red Monastery, with white limestone and several pink and black granite columns also used in the building’s construction.

The monastery was founded by Saint Bishoy at the beginning of the fourth century AD. It has survived two fires over the course of its history, the first was during the Roman Period, with the second the result of Berber attacks.

All that remains of the Red Monastery is its church and surrounding fortification walls to the south, with remains of a structure, thought to belong to an industrial area, north of the church also surviving.

The main church is composed of a long rectangular space composed of three wings. The middle wing is the largest of the three. A church known as the “Church of the Virgin Mary” is attached to its south-west corner. On its eastern end, the monastery’s church ends in a tripartite structure decorated with murals done with tempera paint depicting Biblical scenes that include Jesus Christ, the Virgin Mary, the Four Gospels, and the Apostles.

The fort occupies the area south of the church, to which its structures are attached. It likely dates to the reign of Empress Helena.

It is a roughly square building that consists of four floors, the ground and first floors of baked bricks, and the top two of simple sun-dried mud brick. The fort itself contains several units that allowed the monks to reside in it for long stretches of time, including a church, cells, a storage room, and a water source.