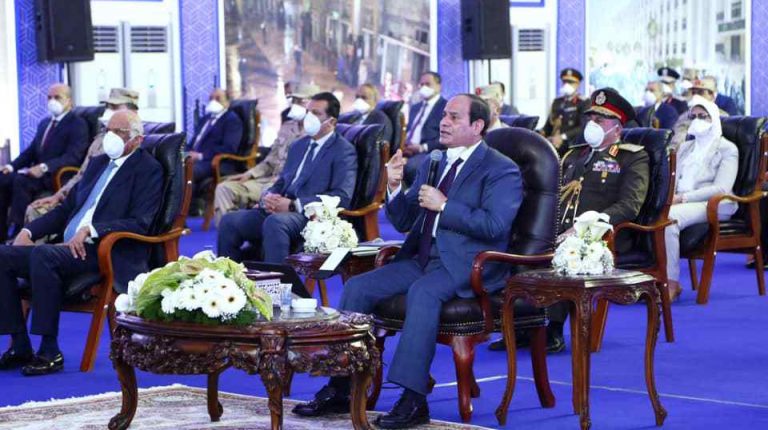 President Abdel Fattah Al-Sisi called for reduction of employees working in office across Egypt, rather than a suspension of work. He demanded that more employees be allowed to work from home, to curb the spread of the coronavirus (Covid-19).

Egypt reported 128 new coronavirus cases and 9 new deaths on Tuesday, bringing the country’s total to 1,450 cases and 94 deaths, while 276 cases have recovered, according to the Health Ministry.

The Egyptian president’s remarks came in a Tuesday conference held by the Armed Forces, and attended by Prime Minister Mostafa Madbouly, several ministers, and army leaders, to highlight the army’s contributions in the protective efforts against Covid-19. The conference followed an inspection tour by President Al-Sisi of the Armed Forces’ preparations for combating the pandemic.

He added that Egypt has sacrificed much since the beginning of the coronavirus crisis; however, the country’s situation is under control. Al-Sisi further praised the efforts made by the government and Armed Forces to contain the virus spread.

The president also asked Egyptians to commit to the state’s measures to curb the virus’ spread. As part of this, he directed the Armed Forces to distribute free face masks to the public. He added that this, alongside social distancing and other precautions, ensures the government can avoid taking stricter measures that would led to a nationwide lockdown.

Al-Sisi said that Egypt’s private sector should never reduce the wages of its workers, pledging to support the sector in this regard by any means necessary. “We have not reduced the wages of state employees, and the private sector is part of the state and should not do this,” he stressed.

President Al-Sisi highlighted that Egypt is ready for all scenarios, adding that six hospitals have recently been established and are ready to open now, with a capacity of 200 beds each.

Minister of Defence and Military Production Mohamed Zaki said the Armed Forces are looking to provide the necessary support to overcome the coronavirus crisis. Zaki added that the Armed Forces are offering its capabilities to serve citizens in the current circumstances.

He pointed out that these four hospitals have 502 rooms equipped with intensive care devices and ventilators, explaining that medical corps will assist the civilian medical staff in providing medical service at the hospitals.

He added that they had prepared two mobile laboratories in order to conduct Covid-19 tests, allocating tents to isolate coronavirus infected cases, in addition to providing air ambulance.

Earlier on Tuesday, Ministry of Awqaf had suspended all public religious activities which encourage gatherings during the upcoming holy month of Ramadan, which will start 23 April.

Curbing the spread of coronavirus, the ministry had prohibited holding of Mawa’ed Al-Rahman (Ramadan Iftar tables), which are congregational breakfast tables that offer food to the poor and passers-by at sundown in the holy month of Ramadan.

The ministry also stressed the banning of congregational breakfast ceremonies at all of its affiliated facilities, as well as banning the practice of staying in mosques for a certain number of days.

“Mosques are to remain closed until no new coronavirus cases are registered across the nation and until the Ministry of Health certifies that gatherings would no longer pose a threat to public health,” the ministry said.

In March, Egypt has adopted many measures to stop the spreading of the virus, including suspending mass prayers at mosque, and shutting down churches.

The country also shut down malls, restaurants, coffee shops, and nightclubs overnight, in addition to imposing a two-week curfew starting from 25 March.