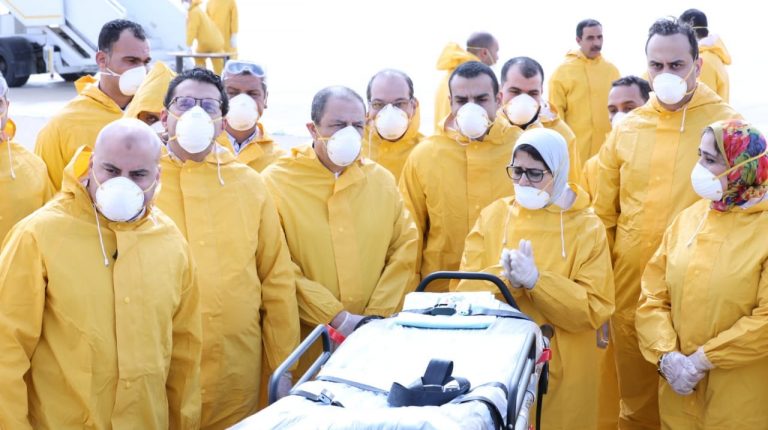 The daily number of cases diagnosed with the novel coronavirus (Covid-19) in Egypt has been on the rise since the announcement of the first case in mid-February. According to official statements, 1,322 people have contracted the disease nationwide, of whom 85 cases have died and 259 have recovered and discharged from hospitals. These figures, though, are widely believed to be undercounted.

According to the latest Ministry of Health’s statistics, Egypt is ranked 33rd in the world in terms of Covid-19 fatality rate. As for infections per million, Egypt ranked 146 globally at 10 per 1 million and 42nd in terms of recovery at 22.5% rate. The ministry said that 61% of infections are males and 39% are females. About 22% of cases aged 50-59, and 94% of the deaths were more than 50 years old. There is no accurate statistics of the geographic distribution of Covid-19 cases nationwide.

On 5 March, Egyptian health authorities detected 12 coronavirus cases on board a Nile cruise ship travelling between Luxor and Aswan. The discovery of these cases was the real turning point in Egypt’s strategy to contain the pandemic.

After the incident, the number of infections accelerated, and Prime Minister Mostafa Madbouly and Health Minister Hala Zayed had to hold a press conference to clarify the situation. During the conference, which was held just a few hours following Zayed’s return from China, the minister announced that the total number of infected cases from the Nile cruise ship was 45. She added that an American lady of Taiwanese origin was the source of infection.

About five weeks since then, Egypt is still in stage 2 of the 5 stage, according to Zayed. She said recently that the recovery rate in the country is 22.5%. Without Egypt’s tight control measures, thousands of citizens could have been infected, according to a paper published in Lancet on 26 March.

Late to test, late to report

“There are many reasons behind the low number of infections in regions currently less affected, such as the Middle East and Africa,” says epidemiologist Ghina Mumtaz of the American University of Beirut, who is working currently on Covid-19.

According to a commentary published recently by Mumtaz in Nature Middle East, these reasons include delay in introduction of the virus into these countries, lower levels of testing and reporting in some countries, lower income countries do not have sufficient resources to scale up testing, and overall weak infection control systems.

She said that this delay allowed some countries to take early preventive measures to break any potential transmission chains and make it difficult for an epidemic to establish itself. She doubted potential effect of seasonality and warmer weather on curbing the spread of the virus.

As for the low fatality rates in the Arab region compared to other areas in the world, Mumtaz highlighted the “effect of age.” She explained, “Based on published epidemiological evidence, severity of the Covid-19 disease is associated with older age. Since the infections in our region are recent, it may be premature to think that fatality rate is low in this part of the world.”

In Egypt, there are no clear statistics of ventilators and Intensive Care beds nationwide, but the health ministry announced four weeks ago that it has allocated 395 hospital beds for Covid-19 patients.

Egypt has 131,000 beds in all hospitals, of which 96,000 in public hospitals and 35,000 in private ones, with just 13.5 beds per 10,000 people, according to the Central Agency for Public Mobilization and Statistics (CAPMAS). There are 2,754 ventilators, 3,959 intensive care beds for adults, and 431 intensive care beds for children at university hospitals, according to the Ministry of Higher Education and Scientific Research.

Egypt has conducted over 25,000 Covid-19 tests until 1 April. According to the World Health Organization (WHO), Egypt has the ability to conduct 200,000 tests.

Wagdy Amin, the Director General of Chest Diseases Department at the health ministry, said: “Testing is not a random process, we test only those who have recently arrived from a foreign country where the pandemic is spreading, those who have been in contact with a confirmed case, and those who show symptoms like fever, tiredness, dry cough, breathing difficulty, aches, and sore throat,”

Only 10% of patients need ventilators, and recovery rates in Upper Egypt are higher than other regions nationwide, Minister Zayed said.

However, Amin explained that recovery does not rely on the environment where the patient lives. “It depends on the general condition of the patient himself and if he is old, or with underlying medical problems like cardiovascular disease, diabetes, or chronic respiratory disease.”

Since the outbreak, the ministry has designated the Nagilla hospital in Matrouh governorate as a quarantine hospital for the infected cases, but after detecting Luxor’s cases, the ministry added 26 additional hospitals to cover all governorates, with 50 other hospitals nationwide test suspected cases.

“The people who were denied Covid-19 testing at hospitals should contact the ministry and file a complaint,” Amin stressed.

The hospitals treat the symptoms, as there is no specific antiviral treatment for the infection, Amin noted. He added, “The protocol is dynamic and subject to change depending on the latest research and clinical trials worldwide.”

Amin explained that doctors decide on best medication on a case-by-case basis, so “it is the decision of the physician, but from the protocol.”

Moreover, the nursing supervisor at Al-Agamy quarantine hospital said the protocol includes Paracetamol, Tamiflu, Azithromycin, and anti-malaria and HIV drugs such as chloroquine. He noted that the hospital is fully equipped and it can receive up to 140 patients.

In order to flatten the rising curve of the virus, Egypt has taken some measures like imposing partial curfew and suspending schools and universities temporarily. All events and large public gatherings have ground to a halt.

But Egypt, the Arab region’s most populous nation, of more than 100 million people, has a large number of its citizens living in low conditions with a weak public health infrastructure. About 32.5% of Egyptians are below the poverty line. So, the cabinet ordered EGP 500 ($31.75) monthly aid for day labourers during the period of precautionary measures.

The government also took other measures to prepare the country for the worst scenario. More than EGP 100bn (about $6.5bn) emergency fund was allocated for the country’s anti-Covid-19 plan, of which EGP 1bn ($6.4m) for the Ministry of Health.

Egypt has closed its borders and suspended international flights. As for national returnees, they were quarantined for 14 days. They receive free medication and accommodation during this period according to a presidential decree.

On 29 March, Egypt witnessed the first coronavirus-related death of a healthcare worker. Dr Ahmed Al-Lawwah, a 50-year-old professor of pathology at Al-Azhar University, who was serving in the Ismailia quarantine hospital, died of Covid-19. He contracted the virus from an Indian citizen who had undergone tests at Al-Lawwah’s laboratory, according to the health ministry spokesperson.

Al-Lawwah’s death raised concerns over healthcare workers safety, as they are likely to contract the virus during treating the patients.

“Doctors could easily be infected during the treatment of the patients. Infection could be transmitted from patients to doctors and healthcare workers during taking samples for testing or when the patient coughs,” said Aya Al-Hadidy, head of Intensive Care Department at Mansoura Chest Diseases Hospital. She accompanied the first coronavirus case from Daqahleya governorate to the quarantine hospital in Ismailia.

One of the major problems doctors face at hospitals is the overcrowding in outpatient departments. “Hospitals lack high-efficiency particulate air (HEPA) filters, but other safety and protective equipment are available at the hospital,” she stressed.

According to Ahmed Saleh, a doctor serving at the Ismailia quarantine hospital, intensive care doctors are the most vulnerable to the infection because they deal closely with the patients. He explained that the hospital could receive patients of all ages, from 4 to 70. The capacity of his department was 60 cases, and it was full.

“We secure all infection control equipment at hospitals for the safety of medical staff, which comes in the first place,” Amin said. The ministry announced also psychological support for the healthcare workers and citizens affected by the pandemic.