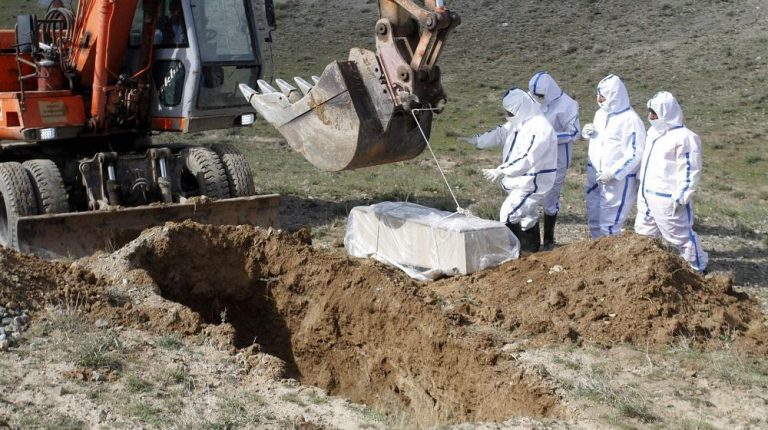 Minister of Health Hala Zayed on Sunday directed the ministry’s preventive healthcare and infection control department to supervise the burial process of the coronavirus (Covid-19) dead, instructing that ambulances transfer the bodies of persons who have died of suspected or confirmed Covid-19 to different burial sites.

In a related context, the Egyptian Medical Syndicate has denounced attempts to prevent the burial of Doctor Sonia Abdel Azim, who died of the coronavirus, in Daqahleya governorate on Saturday due to fears the burial would allow the virus to spread.

The syndicate called on the authorities to punish anyone who tries to prevent an employee from performing their work. It suggested imprisonment for periods ranging from six months to two years.

Ehab Al-Taher, Secretary General of the Medical Syndicate, said there is no infection risk in burying people who died from the coronavirus when the proper health measures were taken during the process.

He added that the incident of Shobra El-Bahw village sent a negative message to those leading the fight against coronavirus, notably healthcare workers. Al-Taher said the incident was due to community incitement against doctors over many years. He added that it represented an injustice against doctors’ rights, and the failure to protect healthcare workers in their workplaces.

The Interior Ministry said in a Saturday statement, “Some [people] in the cemetery area of Shobra El-Bahw village tried to prevent the burial of a woman who died as a result of being infected by the coronavirus. Those elements were dealt with, and 23 of them were arrested.”

“This was caused by rumours spread by the electronic committees of the outlawed Muslim Brotherhood group, under the pretext of preventing the spread of the disease,” the statement added.

In a televised phone interview, Shobra El-Bahw’s mayor Ibrahim Abdel Hamed said the ambulance which carried the 64-year-old doctor’s body had preventive medicine specialists on board. The specialists had tried to convince locals that there was no risk in burying the body, but the residents, particularly the youth, refused to let the body be buried.

The doctor’s burial in her husband’s hometown was only allowed to take place after authorities intervened under strict security measures.

This is not the first time in recent days that people have opposed the burial of coronavirus victims over the misconception that this would allow the virus to spread.

Last week, Beheira governorate witnessed a similar incident as security forces intervened to allow the burial of a woman who died from the coronavirus. Locals there had also originally refused her burial in the village’s gravesite.

Eye-witnesses said that a doctor from the village working ata hospital was infected with the coronavirus, after coming into contact with an infected patient. The doctor’s mother, reportedly in her seventies, caught the virus as a result,and has since been transferred to an isolationhospital. She later died from the virus.

The eyewitnesses added that the doctor’s family had tried to bury the mother in the family’s grave in the village. Villagers, however, gathered in front of the car carrying the woman’s body, and refused to let the burial take place over fears of infection.Security forces intervened to disperse the crowd allowing the burial, amid strict preventive measures.

In Ismailia governorate, a young female doctor was bullied and some attempted to prevent her from entering her home. Dr Dina Abdel Salam, a dermatologist at Al-Qantara Central Hospital, said via social media that she was bullied by her neighbours who tried to drive her out of her house.

The young doctor said she had to call the police, who intervened and dispersed the neighbours.

In a quite different incident, dozens of villagers wearing facemasks and gloves gathered on Saturday to bid farewell to a woman who had died of the coronavirus, in the village of Shabas Omair, Kafr El-Sheikh governorate.

Pharmacies and supermarkets distributed the gloves and facemasks to those villagers attending the funeral for free. As the ambulance carrying the body arrived, mourners lined up to attend the funeral prayer, applying the social distance measures.