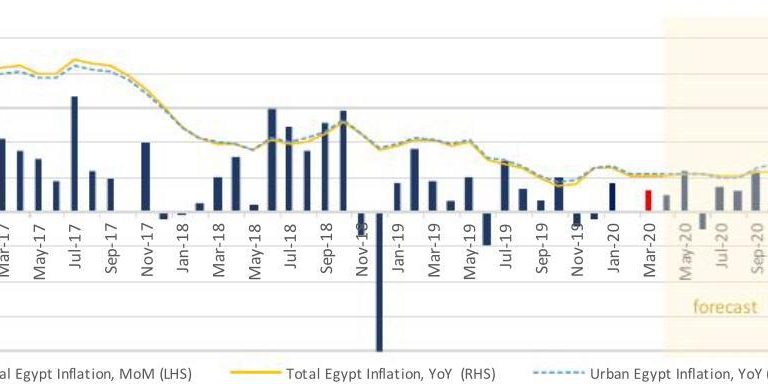 Egypt’s inflation in March fell to 4.6% y-o-y, down from 4.9% y-o-y in February, continuing a decline for the fourth consecutive month. The deceleration was supported by a price decline in transportation, alongside a mild price growth in food and beverages. The decline also comes despite a price hike in the tobacco category, following new taxes being applied on this category on 26 February.

The highest growing category annually remains education, showing a 28.5% y-o-y rise, followed by recreation and culture, as well as transportation, growing at 14.3 % and 13.4% y-o-y in March, respectively. The food and beverages category declined by 3.0% representing the downward pressure causing the slowdown in inflation.

Monthly inflation in March grew 0.6% compared to 0.0% in February. The highest growing category was tobacco, growing at 5.4% m-o-m, a category which usually remains unchanged. The growth has followed the amendments to the increased value-added tax (VAT) on cigarettes and tobacco. The food and beverages sector showed a mild 0.8% growth, and communications grew by 2.1%.

The CBE cut interest rates by 300 bps during an emergency meeting in early March, in an effort to protect the economy from the fallout of the ongoing coronavirus pandemic. As the situation persists, Beltone analysts expect the CBE to hold on to interest rates, and to assess the impact of the cut and the stimulus packages. Once they have the information, they will decide whether more cuts are needed, with rates to remain the same despite March’s inflation.