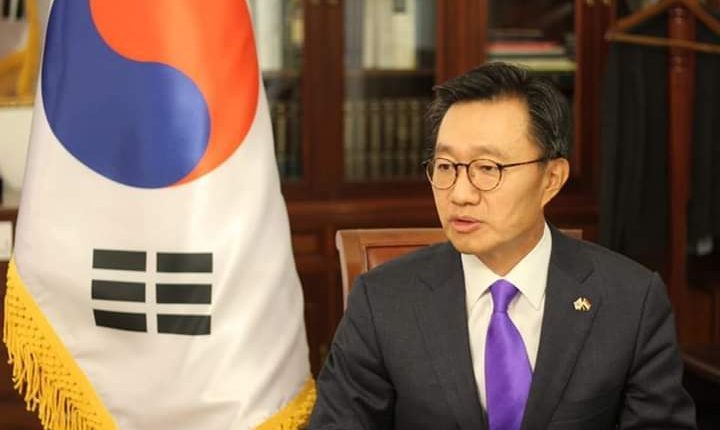 South Korea is to double its financial support for Egypt in combating the ongoing coronavirus (Covid-19) pandemic, the country’s ambassador to Egypt, Yeocheol Yoon, has announced. With this in mind, South Korea will allocate $200,000 in emergency assistance to support Egypt’s fight against the coronavirus.

“As an additional measure to follow up on our initial emergency aid, South Korea has decided to further provide important medical equipment such as CT scanners and oxygen tanks, which can help detect and treat Covid-19, equivalent to $200,000, to a local hospital in New Salhia, Sharqeya governorate, as part of our official development assistance (ODA),” the ambassador said.

Daily News Egypt interviewed Yoon on the occasion of the 25th anniversary of diplomatic relations between Egypt and South Korea, celebrated on 13 April. During the interview, Yoon shed light on the diversified Egyptian-South Korean relations, and the two countries’ cooperation on Covid-19 fight.

What are the updates of Egypt-South Korean cooperation against Covid-19?

As the proverb goes “A friend in need is a friend in deed”, the Korean government is fully ready to assist its Egyptian counterpart by sharing its experiences and insights to contribute to minimising the hardships and difficulties our Egyptian friends may suffer before it gets more serious.

Realising not only the importance of stronger solidarity and coordinated actions in the global community to win against Covid-19, but also two countries’ best ever bilateral relations, the Korean government is financially supporting Egypt in its battle against the pandemic.

Can you tell us more about South Korea’s experience in combating Covid-19?

The first confirmed case of Covid-19 in South Korea was announced on 20 January, and the country soon became one of the worst-hit countries, aside from China, in the early stages of outbreak with the sharply increasing number of cases.

However, after vigorous testing, with the total number of tests reaching half a million people and meticulous tracing, the number of new daily confirmed cases peaked in late February and has steadily declined. Since mid-March, the daily recovered cases have significantly surpassed new confirmed cases, reducing the number of patients in treatment. Now, many experts and global media started to cover Korea’s successful response to Covid-19 spread, particularly its innovative and thorough testing.

The Korean government’s efforts to contain Covid-19 are also summarised in five key elements with the acronym TRUST. This stands for Transparency, Robust screening and quarantine, Unique and Universally-applicable, Strict control, and Treatment.

My sincere wish for both the South Korean and Egyptian people is that we will overcome this crisis as early as possible, so that we can further deepen our relationships, as an old Korean saying goes “After the rain, earth gets more solid”.

How is the South Korean embassy celebrating the 25th anniversary of diplomatic relations with Egypt?

Today, in normal circumstances, we would have celebrated the “silver jubilee” of our official relations with many events highlighting our current status of cooperation and friendship in economy and culture. We would have recognised many Egyptian friends in the government, business community, and cultural sectors, who made it possible for us to advance our relationship this far, even without a summit meeting.

Somehow God presented us with this new challenge of Covid-19, and tested how solid resolve is to fight it together upon our tradition of friendship and common prosperity forged during the last quarter century. In that sense, our anniversary provided us with an opportunity to reflect on the meaning of true friendship in our times of uncertainty and upheavals when everybody is looking after one’s own safety and survival.

I am sure the Korean and Egyptian peoples will prevail after going through this difficult period hand-in-hand, and create our bright future together, for another quarter century and beyond.

Looking back, one may wonder why it took so long for our official relations to materialise when we have many historical reasons to be close friends.

Egypt and South Korea’s historical background dates back to 100 years ago, when the Korean people expressed their strong desire for independence from the Japanese occupation with their March 1st Movement in 1919. On the other side of the globe, the Egyptians also fought for their freedom in the same year and soon achieved their independence in 1922, and both peoples were encouraged by the Principle of Self-Determination in the aftermath of World War I.

Cairo has been engraved in the hearts of the Korean people since November 1943 when the Cairo Declaration was adopted by the allied powers promising the freedom and independence of Korea from the Japanese occupation.

When World War II came to an end in less than two years, Korea was liberated from Japan on 15 August 1945 and was reborn as an independent state, the Republic of Korea three years later, fulfilling the promise of the Cairo Declaration.

Fifty years had passed since the historic milestone when official diplomatic relations finally started in 1995. The two countries, however, have witnessed rapidly growing development in various fields over the past quarter century. President Abdel Fattah Al-Sisi made a historic visit to Korea in March 2016, when the two countries adopted the Comprehensive Cooperative Partnership. This was followed by the summit meeting between President Moon Jae-in and President Al-Sisi on the sidelines of the UN General Assembly in September 2018. In October 2019, a high-level Korean business delegation met President Al-Sisi. They were impressed by his vision for future horizons of economic cooperation to make Egypt a hub of trade and industry in the Middle East and Africa.

Many Korean companies are already investing in Egypt and joining the path for the development of Egypt’s economy. Samsung and LG, with their investments of more than $550m, have contributed to Egypt’s foreign currency reserves through exporting their “Made in Egypt” products to neighbouring countries over $700m per year.

More than 30 Korean companies with almost 10,000 Egyptian employees are boosting the Egyptian economy in various areas.

Can you update us on the projects South Korea is supporting in Egypt?

The Korea-Egypt Technological University in Beni Suef, the Korea International Cooperation Agency’s (KOICA) $5.83m project, is providing the practical training in ICT and Mechatronics for youth in Upper Egypt. This is to equip them with useful skills and provide better job opportunities, and Prime Minister Mostafa Madbouly lauded and hoped for its replication throughout Egypt.

The project of modernising the railway corridor signalling system between Luxor and Naga Hamady will greatly improve efficiency and safety of the system and, like the Technological University, contribute to creating a better economic ecosystem in Upper Egypt, in line with the Egyptian governmental policy.

Despite the geographical distance and different backgrounds in history and culture, Korean and Egyptian peoples understand each other very well and share the common values in their daily lives, which are well shown by young Egyptians’ love of Korean cultures and even their deeper understanding of K-dramas being aired on an Egyptian TV channel five days a week.

Last year, in our efforts to promote the mutual understanding between two countries, my embassy worked on a project creating a YouTube series called “Assalam Alaykcum, Cairo!” to introduce modern Egyptian life to the Korean people with the participation of Korean-speaking Egyptian students.

All things considered, I can proudly say that the two countries’ relationship has never been better.

It was at this juncture that we were working on a historic visit in mid-March by South Korean President Moon Jae-in to Egypt to celebrate the 25th anniversary and meet with President Al-Sisi to build their vision for our bilateral relations for another quarter century. We even had our Trade Minister Yoo Myung-hee’s visit in preparation for this summit.

Unfortunately, President Moon’s visit to Egypt had to be postponed at the last minute due to the unexpected worldwide outbreak of Covid-19. Still, the two presidents had a telephone conversation on 5 March and discussed ways to further expand our cooperation in various areas.

Can you please elaborate on both leaders’ phone conversation?

President Al-Sisi expressed Egypt’s firm solidarity with South Korea in confronting Covid-19. They also came to an agreement on joint efforts to cope with the global crisis.

As the two presidents confirmed during the phone conversation, the year 2020 will be a great opportunity to upgrade our relations from a Comprehensive Cooperative Partnership to a higher level, not only with economy and infrastructure, but also with health, medicine, and waste treatment to improve the living environment of our fellow Egyptians.

Are there any new projects the embassy works on?

The Korean embassy in Cairo has been working hard on those projects in cooperation with Egyptian colleagues from various ministries to reap mutual benefits for both our peoples.

As one of the leading pillars for our future cooperation, the two countries will embark on a joint study on the possibility of concluding a Free Trade Agreement (FTA) to boost bilateral trade as well as investment which will be greatly facilitated and stimulated through the FTA. The Korean Trade Minister, during her visit to Egypt last February, already had substantive discussions with her Egyptian counterpart, and they agreed on establishing a task force to make necessary studies and preparation.

Egypt being the most advanced nation in Africa, with a strategic location and young, competent population, we believe it is the right time to allow Korean companies’ repositioning of their production “Made in Egypt” for export to neighbours in the Mediterranean and Africa, making Egypt an industrial and export hub in the region.

1.2% increase in foreign employees in private, investment sectors during 2019