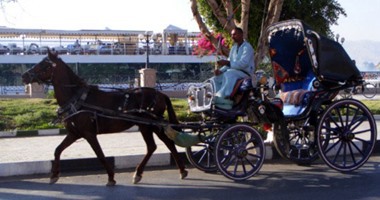 The Ministry of Tourism and Antiquities and Egyptian Tourism Federation are implementing an initiative to support animal-based tourism workers, such as horse-drawn carriages owners, as well as feluccas at archaeological sites.

According to Minister of Tourism and Antiquities Khaled El-Anany, guards working at archaeological sites, are also covered by the initiative.

El-Anany’s remarks on Tuesday came during his meeting with Minister of Planning Hala Al-Saeed and Minister of Manpower Mohamed Saafan. During the meeting, the ministers discussed mechanisms to support the tourism sector’s regular and irregular employees who have been negatively affected by the coronavirus.

El-Anany added that the state has taken many decisions to preserve workers’ rights, pointing to the postponement of the real estate tax on tourism facilities for three months, and which can also be paid in instalments.

The move comes in addition to the lifting of administrative reservations on all financiers who have a payable tax, of which they can pay only 10% of the tax owed by them.

El-Anany also said that the state has postponed payment on all tourist and hotel establishment dues for a period of 3 months, without fines or delay in interest.

On 8 January, the Central Bank of Egypt (CBE) launched an initiative supporting local tourism, allocating EGP 50bn to financing tourism companies and facilities. The funds are for those who aim to replace and renew hotels and transport fleets at a return rate of 8%, and was calculated on a declining basis.

As part of the initiative, banks can grant credit facilities with a maximum two-year repayment period in addition to six-month grace period starting from the grant date. During this time, banks can capitalise on unpaid interest.

El-Anany pointed out that the cabinet has agreed to extend the deadline granted to tourism development and investment companies to complete their projects for a year.

He called on tourism and hotel companies to refrain from lay–offs, adding that his ministry is cancelling licences for hotel establishments that lay off workers.