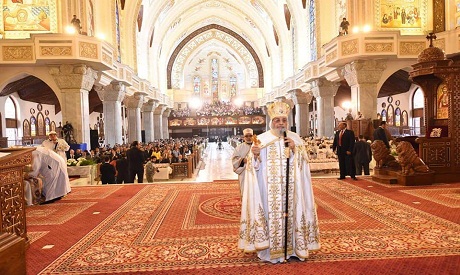 Pope Tawadros II of the Coptic Orthodox Church in Alexandria will lead the Easter Mass on Saturday at the Church of the Transfiguration in St. Bishoy Monastery in Wadi Natrun, northwest of Cairo.

In a statement, the Egyptian Coptic Orthodox Church spokesperson Polis Halim said the Easter Mass will begin at 20:00. Due to social distancing measures and the closure of public spaces and houses of worship due to the coronavirus outbreak, the Easter Mass will be held behind closed doors, but it will be broadcasted via Egyptian television and Coptic satellite channels.

Halim added that Pope Tawadros II will not receive guests at St. Mark’s Coptic Orthodox Cathedral in light of the state’s preventive measures to curb the spread of COVID-19.

Earlier on Friday, Pope Tawadros II led the Good Friday Mass at the Church of the Transfiguration with limited participation of bishops, monks, and deacons. No worshippers were allowed to take part due to the preventative measures.

The prayers were broadcasted through Christian satellite channels and the spokesperson’s official social media.

The Coptic Orthodox Church, which is headed by Pope Tawadros II, has released a set of decisions as part of the state’s precautionary measures to curb the spread of the coronavirus. All prayers and activities in churches across Egypt have been brought to a halt, alongside prayers over the crown, with funeral prayers limited to the deceased’s family members.