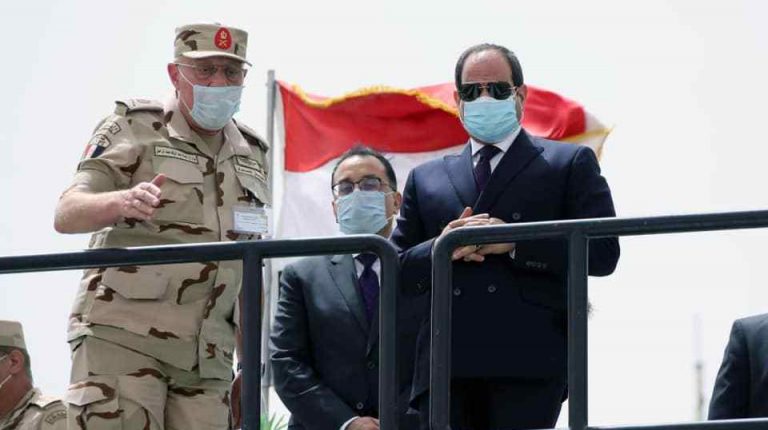 The inaugurations were held in the lead up to the Sinai Liberation Day celebrations, which is set to take place on 25 April. They celebrations have also served to highlight the large national projects that are seeing investments and developments flow into the underdeveloped Sinai Peninsula.

In his speech, Al-Sisi outlined that the overall cost of projects in Sinai stand at EGP 600bn, with the Armed Forces’ Engineering Authority responsible for half of that sum.

“Be aware of all that we have done over the past six years, as we have invested large sums of money in Sinai,” Al-Sisi said during his speech, whilst reaffirming the state’s commitment to reconstructing the area.

President Al-Sisi added that work on the tunnel started four years ago on the back of dreams and visions, with Egyptian workers contributing to their fruition.

“We are keen to provide the necessary insurance in the various workplaces, and we will provide more in cooperation with the Ministry of Health and the Ministry of Defence,” Al-Sisi said, regarding employment opportunities for Egyptians.

He called for companies operating in tunnels below the Suez Canal to continue work on tunnels underneath Cairo Airport at the same prices as those of the new Martyr Ahmed Hamdi II tunnel.

The celebrations began with a documentary film showing the most prominent of Egypt’s achievements and national projects implemented in Sinai.

Development in the Suez Canal region governorates began with the implementation of a number of projects, including the dual Suez Canal project, and the digging of the new Suez Canal. The most important areas for development were transport and 1,400km of road systems to link Sinai with mainland Egypt.

Al-Sisi had instructed for the Sinai Peninsula to be linked to the Nile Delta region through a number of tunnels, with work beginning in May 2015 to be completed ahead of schedule.

In May 2019, the President opened a number of tunnels linking Sinai with Suez Canal and Nile Delta cities.