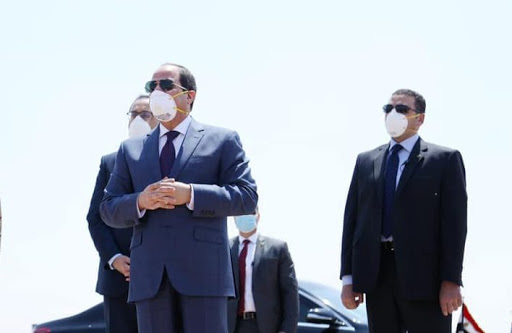 The inaugurations have come as part of Sinai Liberation Day celebrations, which is set to take place on 25 April. The inaugurations also serve to bring focus onto the state’s plan to implement large national projects to push forward with the Sinai peninsula’s development and investment.

The celebration began with a documentary film showing the most prominent of Egypt’s achievements and national projects implemented in Sinai.

President Al-Sisi added that work on the tunnel started 4 years ago and was a dream that could not be done without Egyptian hands. He called for companies operating in tunnels below the Suez Canal to continue work on tunnels underneath Cairo Airport at the same prices as those of the new Martyr Ahmed Hamdi II tunnel.

Development in the Suez Canal region governorates began with the implementation of a number of projects, including the dual Suez Canal project, and the digging of the new Suez Canal. The most important areas for development were transport and roads to link Sinai to mainland Egypt through 1,400 km of roads.

Al-Sisi instructed for the Sinai Peninsula to be linked to the Nile Delta region through a number of tunnels, with work beginning in May 2015 to be completed ahead of schedule.

In May 2019, the President opened a number of tunnels linking Sinai with Suez Canal and Nile Delta cities.