About 12,000 years ago, the arid desert in today’s Arabia was rich in vegetation, with high amounts of precipitation and expanding lakes. The lush surroundings led to a corresponding expansion in ancient human settlements.

However, the environmental changes in the following millennia caused a series of severe droughts, which resulted in drastic changes in the ecosystem. In turn, the droughts led to the desertification currently witnessed across Arabia.

In a new study, a team including researchers in archaeology and geography under the supervision of Germany’s Max Planck Institute for the Human History, the detailed comparative study looks in depth at the Holocene era, or the last 12,000 years of the earth’s history that extends to the present time.

Researchers have studied human migrations and the conditions of human settlement using satellite images and radiocarbon dating. They then revealed that human societies in the region were severely affected by environmental changes in prehistoric times, which forced them to adopt more flexible strategies to cope with drought. In effect, it was a case of change their lifestyles and economies, or die. 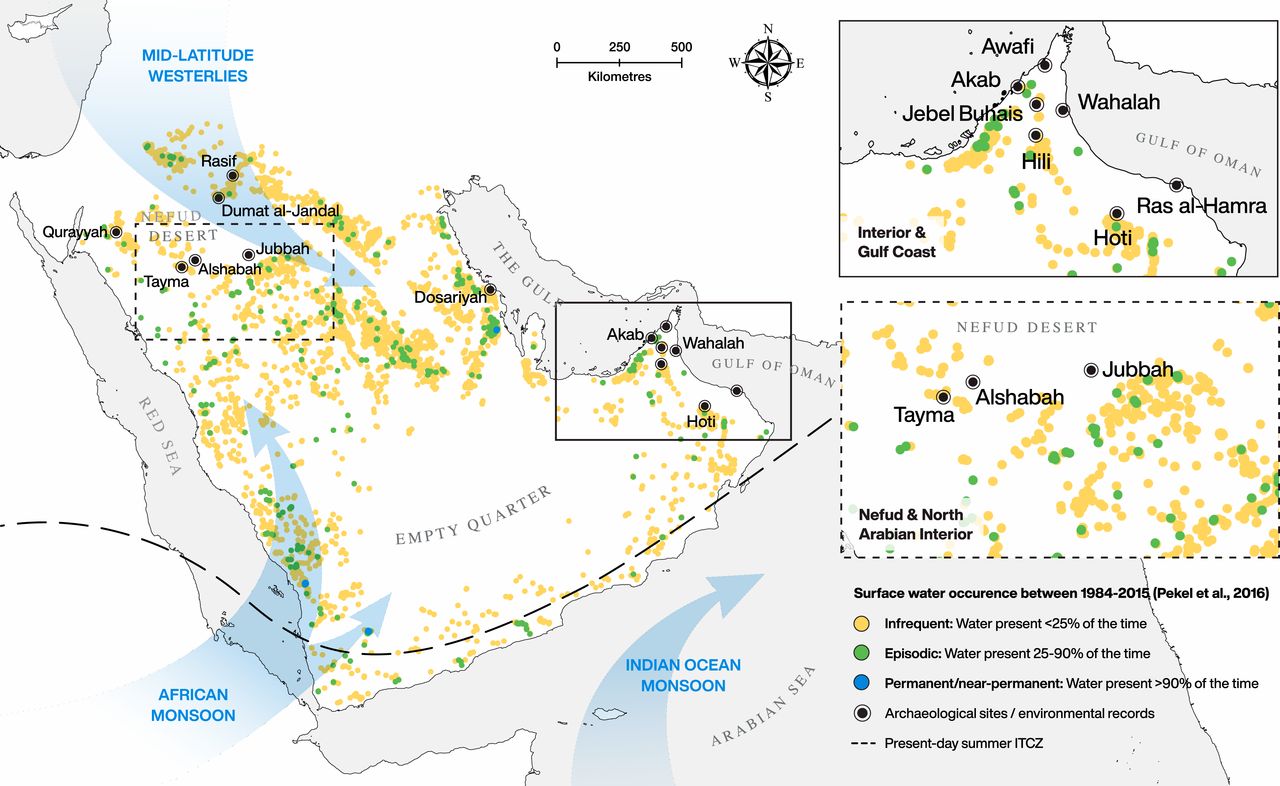 Today, the Arabian Peninsula is one of the world’s most arid regions. But its climate was not always that way, and the past witnessed greater drought and more humidity over different time periods. This started with the end of the Pleistocene era until the modern life or the Holocene era.

The Holocene can be classified into two main parts: early Holocene and late Holocene. The early Holocene spanned a period ranging from 3,000 to 6,000 years, and was characterised by the prevalence of humidity periods in Arabia and North Africa.

Some researchers prefer to separate the time period that began with the start of the industrial revolution in Western Europe in the eighteenth century, and carries on until today. They call it “the human era” or “Anthropocene”, while others see this human effect as earlier.

Their argument, which raises a profound disagreement among those who study the earth’s history, is that since that date man has become the only influencer on the planet. Humans have caused major changes such as global warming, ocean oxidation, climate control, affected water sources, and the movement of other species and plants.

Far from the academic disagreement, the history of the Earth is a testament to the region’s exposure to major climate changes over the last 12,000 years. The degree of response to these changes varies from site to site, depending on natural environmental conditions and economic and social changes.

For example, the north part of Arabia had witnessed faster rates of drought compared to the southern sides.

Ahmed Kenawi, assistant professor of physical geography at the Sultan Qaboos University in Oman, explains that some evidence of environmental changes can be observed in the region. This can best be seen in geographical samples such as the network of dry wadis covering large areas, which were abundant with water during the early Holocene era.

There is a lot of natural and vital evidence that confirms this, including drawings and carved inscriptions on some of the caves inhabited by man in these ages, which indicated the presence of a dense vegetation cover. There are also wild animals that are difficult to find in these environments in the current conditions, such as lions, tigers, and hyenas, as well as evidence of large lakes.

These eras were accompanied by the rise of many civilisations, including in Yemen. Kenawi said that the second part of the Holocene began with the prevalence of severe climatic changes. This included a sharp decrease in the amount of rain, the prevalence of drought, and resulted in a decline of the civilisations that existed at that time and deterioration of the vegetation. 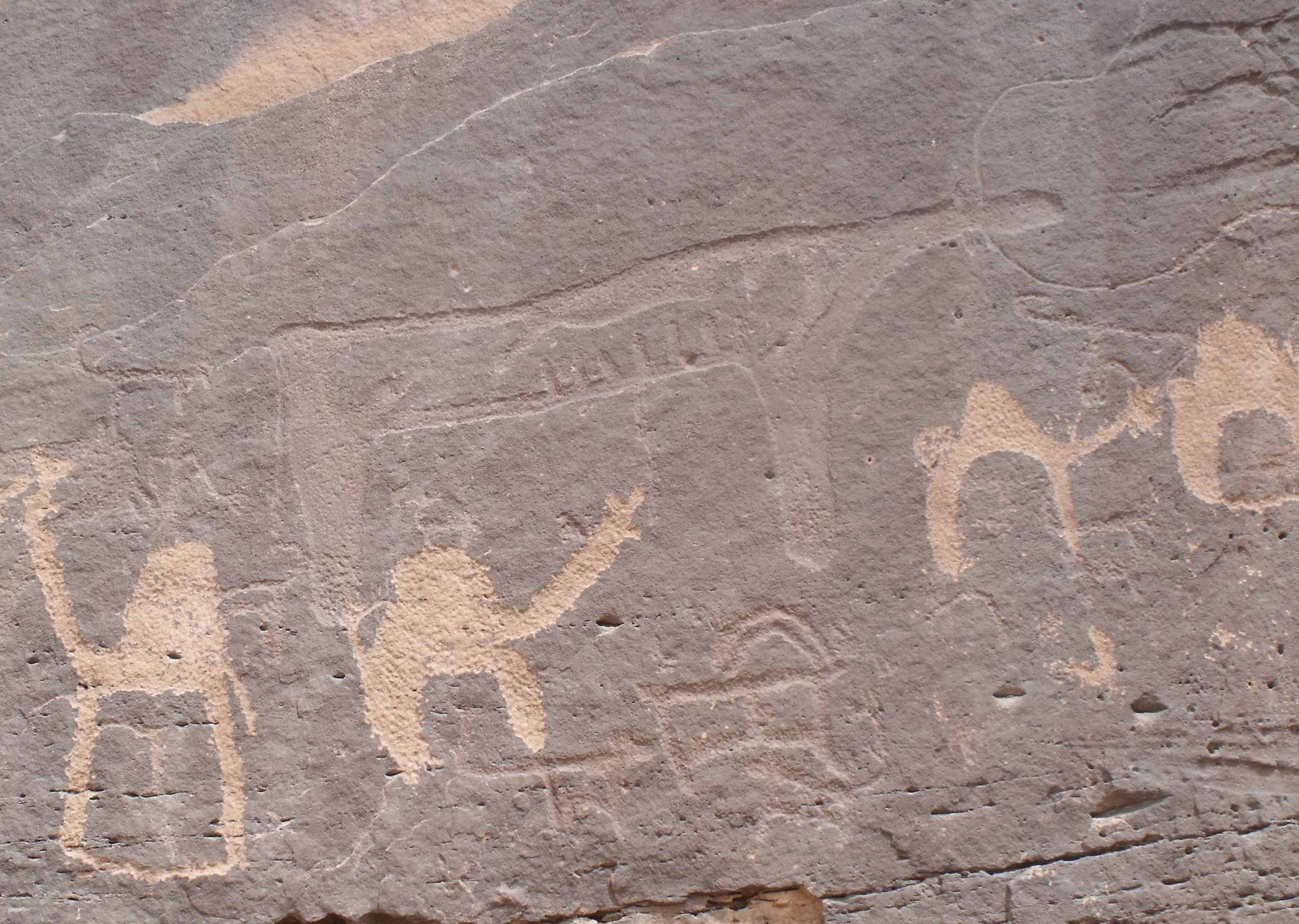 These natural changes have resulted in simultaneous changes in the structure and spread of human societies in the region, as a kind of response to these changes.

“We were struck by the great degree of variability in how climatic events played out across the peninsula and how regional populations responded differently,” said Professor Michael Petraglia, of the Max Planck Institute for the Science of Human History, and lead author of the study. “Though climate change today is a global problem, given our study, it’s also clear that regional and local communities must also work together to solve ecological problems and crises.”

He told Daily News Egypt that when people became more stable, they built a series of arches and dams to collect water from rain. In later times, they also used groundwater resources, such as wells, once they realised these could be exploited.

He further explained that the people of the northern regions of the Arabian Peninsula have coped amazingly with periods of drought. This is due to the fact that the region had a different rainfall system compared to the southeast of the Arabia, and people were able to gather in areas characterised by the presence of shallow ancient lakes. An excellent example of this is the Jubbah oasis in today’s north-east Saudi Arabia, where 170 stoves and livestock were found. This is the strongest evidence of a human presence in the Nefud desert during the past 9,000 years.

The study describes the period between 5900 to 5300 BCE as a “dark millennium”, where dirt prevailed in most of the region, leading scientists to believe that it was not habitable. The evidence from Jubbah, however, says otherwise.

Survival strategies pursued by the population included the shift from the fishing and agricultural trades to grazing, as a result of the lack of rain and vegetation. Many societies moved from a state of stability and settlement to a state of movement and instability. Communities migrated from the heart of the peninsula to the fluvial environments associated with the presence of rivers, such as the Levant and Iraq.

This was accompanied by other economic changes, such as a shift towards some professions based on geological environments and rock scattered throughout the region, such as stone weapons industries or building and carving in rocks.

Some residents resorted to migrating from the interior regions towards open coastal areas, and this was followed by commercial shipments with the regions of South Asia. According to the study, the sequence of droughts and the increase in severity in the late Holocene, was accompanied by high mortality rates, as a result of food shortages and the deterioration of water resources, and consequently large demographic changes and population composition.

Lessons from the past

“Despite our technology and advances we still look to the past to provide solutions to current environmental issues. The sustainability strategies employed by the ancient Arabians demonstrates flexibility adaptability and offer solutions to our changing world,” said Kira Westaway, Associate Professor of Geochronology and Quaternary science at Macquarie University, Australia.

She added that to reconstruct this evidence requires a perfect marriage of detailed archaeological evidence and records of past climates, not an easy undertaking.

Petraglia and his colleagues successfully drew on multiple data sets and techniques to provide a comprehensive, over-arching ‘big picture’ look at how ancient Arabians dealt with similar issues to those we are facing today.

They directly compared drought events and the timing of archaeological evidence in Jubbah’s ancient lake basins and the Nefud desert zone. On the back of this, they discovered diverse human responses and large regional differences.

Northern Arabia’s large basins acted as hubs during droughts and they built large landscape features to capture runoff. Populations in south-eastern Arabia, however, headed to coastal locations and dealt with environmental changes across climatic changes.