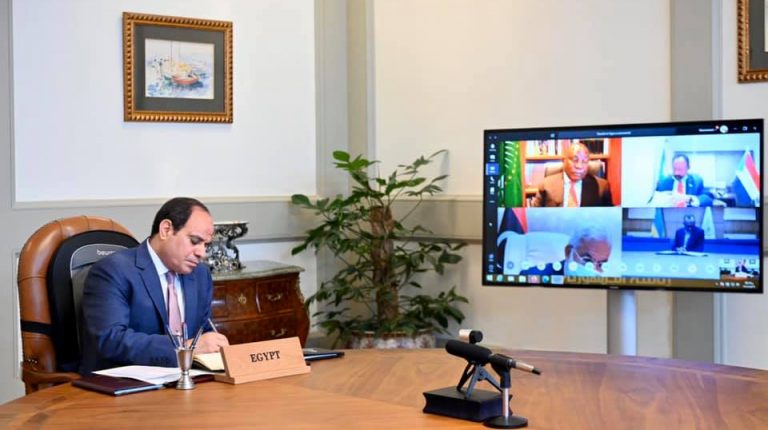 Egyptian President Abdel-Fattah Al-Sisi on Wednesday attended with his African counterparts a virtual mini-summit held by the African Union (AU) to discuss joint efforts to combat COVID-19 pandemic in the continent, the Egyptian presidency said.
“In this regard, the president stressed the necessity of continued communication between African states to coordinate efforts and promote joint continental work for combating the novel coronavirus,” Egyptian presidential spokesman Bassam Rady said in a statement.
Held via a video conference, the mini-summit included the current AU chief and South African President Cyril Ramaphosa, as well as the leaders of Kenya, Mali and the Democratic Republic of Congo, Gabon, Niger, Tanzania, Rwanda, Chad and Madagascar, in addition to the Sudanese prime minister.
It was also attended by the head of the AU Commission and the director of the Africa Centers for Disease Control and Prevention (Africa CDC).
During the virtual summit, Al-Sisi underscored the importance of regional economic blocs in Africa in fighting the pandemic, commending the results of previous African virtual mini-summits including the establishment of the African Business Coalition on Health, according to Rady.
The Egyptian president attended two similar AU virtual mini-summits held in late March and early April to unite the continent’s efforts and exchange expertise in fighting the novel coronavirus.
Earlier on Wednesday, Egypt confirmed 226 new COVID-19 infections and 21 fatalities, raising the number of cases in the  country to 5,268 and the death toll to 380.
Meanwhile, Africa CDC said on Wednesday that the confirmed COVID-19 cases in Africa hit 34,915 with a death toll of 1,521.