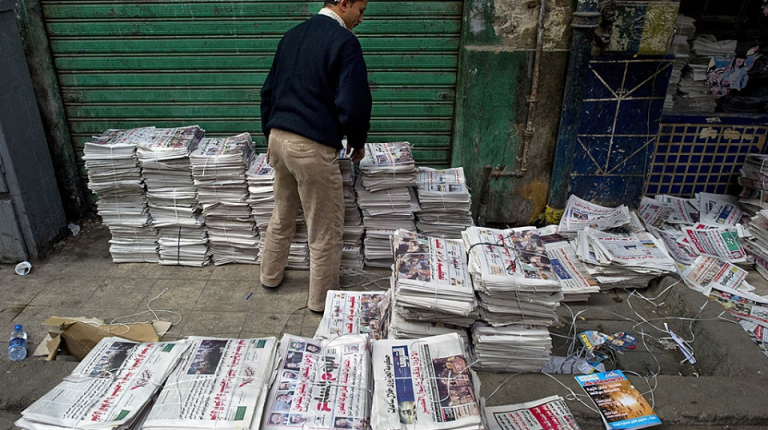 Coronavirus pandemic poses a new challenge for print journalism globally amid fears of contagion. There are concerns that the crisis will help bring about the end of the already struggling industry.

With more than 3.6 million coronavirus cases and 247,000 deaths across over 100 countries, several countries in the Middle East, such as Jordan, Morocco, Kuwait, and Tunisia, halted print newspapers as a precautionary measure to limit the transmission of the virus.

Curfews enforced by many countries to curb the outbreak of coronavirus have added insult to injury as many newspapers and magazines face difficulties in distribution and printing.

Long before the pandemic, Egyptian print journalism has been struggling to survive in the wake of the liberalisation of local currency in 2016 which increased the prices of paper. Additionally, over the last years, print journalism in Egypt has been suffering from a decline in distribution rate and advertisement, and low-quality content. With the Covid-19 fallout, subscriptions and advertisements are expected to decrease further as the people fear contagion of the virus.

In the time of digital journalism, newspapers have been thrashing about to maintain their readership as more people tend to consume news online where the content is interactive and includes multimedia elements.

Many observers believe if coronavirus did not end newspapers, it would at least affect its future and sustainability.

Khaled ElBaramawy, a digital media expert, told Daily News Egypt that print journalism has been affected by the coronavirus, not only in Egypt but in the whole world. He added that print journalism in the Arab countries witnessed a significant decline regarding proliferation and influence.

He noted that the newspapers industry in Egypt has many issues regarding printing, distribution, and content.

In the time of coronavirus, the people would need newspapers for entertainment and knowledge. Press institutions can overcome the fears of infection through packaging the newspapers and delivering them to readers’ homes free of charge.

“But above all, they have to produce in-depth and valuable content because people will never pay for journalism that does not have new information or analysis,” ElBaramawy explained.

Print journalism in the United States, Europe, and Japan is in a better position because of the profit model and digital subscription; therefore it will cope with challenges.

“I am afraid it is too late for newspapers which did not find other means of profit to overcome this period without loses. But I believe that there are some people who still interested in getting a newspaper,” ElBaramawy said.

He added that press institutions could introduce some solutions to attract readers during the crisis, such as offering free delivery and free first month, and switching from daily to weekly publication.

ElBaramawy believes major newspapers in Egypt only distribute about 10,000 copies daily, adding that increasing this figure to 4,000 or 5,000 is not difficult, but represents a challenge in the Egyptian market.

In a report published on Sunday marking the World Press Freedom Day, the Central Agency for Public Mobilization and Statistics said the daily distribution rate of newspapers reached 1.4m copies in 2018.

The report added that there were 70 public newspapers in Egypt, including three party newspapers, in 2018, compared to 76 newspapers in 2017, a decrease of 7.9%.

Nouha Belaid, a Tunisian professor of journalism at Manouba University, told DNE that print journalism has suffered from several challenges during the last 10 years, most notably maintaining their readership amid the availability of information on social media and the spread of digital media.

“If new technology media pose a threat to print journalism, coronavirus poses a greater threat especially with fears of using paper amid the domination of the virtual world,” she said.

“As information is available online, people would prefer online content than print journalism to protect their health and to avoid the contagion of coronavirus through touching newspapers,” Belaid added.

She believes print journalism has no escape from coronavirus. “It is time for print journalism to die out. Even if we enjoy reading a newspaper, just thinking of our health will prevent us from doing this.”

However, she said that providing a PDF version of a newspaper could allow people to read it from home. “Changing the business model and depending on subscriptions instead of individual sale for newspapers could help a little.”

On the other hand, Yasser Abdel-Aziz, a media expert, told DNE that print journalism has been facing a profound crisis even before the coronavirus, which could be dubbed “an inconsistency with the future.”

Abdel-Aziz highlighted that almost half of the world population uses the Internet, mostly young people, amid a remarkable decline in depending on print journalism for getting information.

He pointed out that the crisis of print journalism has many aspects which are economic and environmental; pointing out that the digital advertising became more feasible than in print journalism. He highlighted that the world became aware now of the risks of using paper, which also affected the newspapers industry.

Print journalism was fading and the coronavirus would deliver “the coup de grace” on it, Abdel-Azizi said.