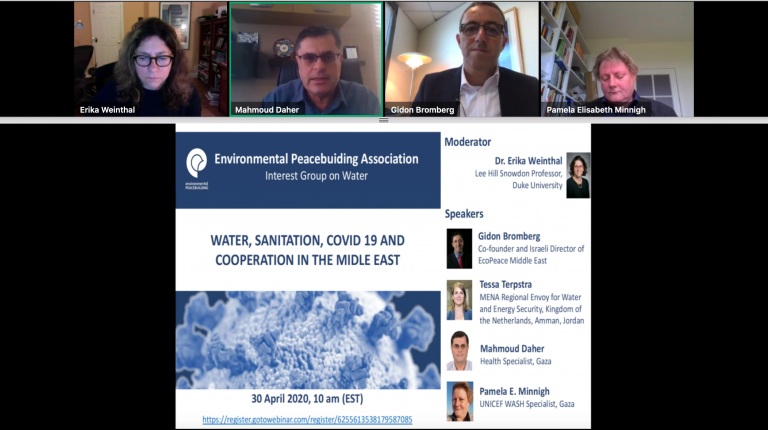 Governments in Jordan, Palestine, and Israel must overcome political hostilities and work closely to protect citizens from the risks of the coronavirus (COVID-19). This will happen by ensuring access to clean water, as risk of infection increases through untreated wastewater and sewage seeping into the soil, groundwater, and surface water.

The message came during an online webinar organised by the Environmental Peacebuilding Association under the title ‘Water, Sanitation, Coronavirus, and Peace in the Middle East’, on 30 April.

Palestinian and Israeli environmental activists, as well as representatives from international organisations working in the region, threw their weight behind the message.

During the webinar, the participants discussed the pandemic’s risks in the three countries and the reasons why governments and citizens are working together to overcome the crisis.

Gidon Bromberg, director of environmental awareness group EcoPeace Middle East in Israel,  said there are four reasons that justify cooperation in water and sanitation in the Middle East.

It has been scientifically proven that the virus that causes the coronavirus remains active in human waste, even after it enters the sewage system, he said. Unlike in developed countries, that have advanced sewage treatment plants that can eliminate the virus, the situation is not the same in developing countries.

Bromberg added that contaminated water does not respect borders, and in one way or another seeps into the natural environment, whether in water or soil. This then crosses political boundaries, spreading infection outside a country’s borders.

The webinar’s participants added that the distance between Jordanian capital, Amman, and the Mediterranean coast in occupied Palestine is only about 100 km. Approximately 25 million people benefit from water resources in this region either from the Jordan River or underground water sources.

“We all know that huge amounts of untreated or partially treated wastewater only leak into the Jordan River from all sides, and in addition to its function as a source of drinking water and agriculture, this river receives annually over a million Christian pilgrims for the purpose of baptism. So all of those people are at risk,” Bromberg said.

In Jordan, water consumption has increased by 40% since the start of the pandemic, due to increased personal hygiene, said Tessa Terpstra, the Dutch government’s MENA Regional Envoy for Water and Energy Security in Jordan.

Terpstra noted that the situation is worsening in refugee camps, highlighting the importance of funding the implementation of renewable energy projects and wastewater treatment.

“Donors should abandon bureaucracy when considering requests for humanitarian support to establish service projects in fragile communities such as refugee camps,” said Terpstra, adding “We must treat the pandemic as a warning of other future shocks, which calls us to seek local solutions to resource sustainability.”

Mahmoud Daher, a health specialist in the Gaza Strip, said that about 97% of the area’s water is unsuitable for human use.

“The blockade caused the health sector in Gaza to deteriorate by up to 50%, which affected the performance of the cleaning and water treatment sectors,” he said.

The webinar’s participants emphasised that the Gaza Strip, which has been blockaded for nearly 13 years, is at high risk from the virus. Because much untreated or poorly treated sewage waste is dumped in Mediterranean waters annually from the Gaza Strip, there is the added risk to other countries of further contagion.

Pamela Minnigh, a UNICEF WASH Specialist in Gaza, said that the strip needs 19m cbm of water annually to meet the basic needs of its population. While 15 m of these come from poor treatment, the rest comes from Israel or contaminated wells that need purification.

“We cannot do much in Gaza, as the Strip lacks capacity and infrastructure, especially in light of the deterioration of basic services, which increases the need for financing,” she added.

Bromberg emphaised that half of food produced in Israel is irrigated with treated water. He added, however, that the Israeli government must realise it is in the interest of its people to establish treatment plants and power stations in the Gaza Strip.

The same invitation was affirmed by Daher, who said “Now, we, the Palestinians and the Israelis, face one enemy, the pandemic, so this is the time to look for mutual interests instead of the causes of conflict.”