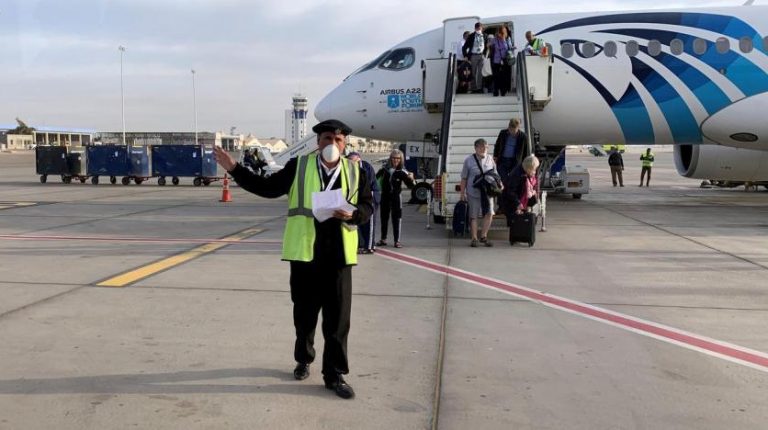 Cairo International Airport received on Saturday an exceptional flight by Air Cairo  a subsidiary of the Ministry of Civil Aviation, repatriating 141 Egyptians stranded in Kuwait.

Two flights from Kuwait carrying 330 stranded Egyptians arrived at Cairo International Airport on Friday. This adds to the return of 1,100 Egyptian nationals from Kuwait in the past two days.

Most of the returnees are Arab Contractors Company employees  who were working on implementing projects in Kuwait. All passengers are scheduled to be examined for the coronavirus at the airport, and will be transferred to government-designated isolation areas for a 14 day isolation period.

Also on Saturday, a total of 71 Egyptian passengers who recently returned from Serbia ended their 14 day isolation period at a number of hotels in Marsa Alam city.

A total of over 1,302 Egyptians were repatriated over 24 hours, from Turkey, Kuwait, Chad, Sudan and Saudi Arabia, according to the Ministry of Immigration.

Marsa Alam International Airport is set to receive eight flights from Washington, Rome, Toronto and Heathrow over the coming week as further repatriations of Egyptian expatriates are made.

The repatriation flights are part of a plan announced by Minister of Immigration Nabila Makram to repatriate all Egyptians stranded abroad by the Eid Al-Fitr holiday.

So far, these trips have carried about 4,000 Egyptian passengers stranded abroad. They have been housed in 11 hotels and tourist villages in coordination with the Egyptian Hotel Association and the Ministry of Health.

Only six confirmed cases of the coronavirus were discovered, among repatriated Egyptians, including four coming from the US.