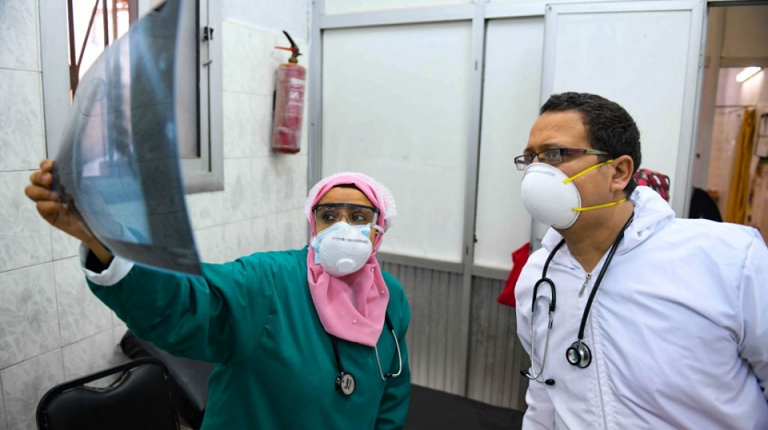 A total of 35 medical workers at Al-Zahraa University Hospital have tested positive for the coronavirus (COVID-19), according to Ibrahim El-Zayat, a council member at the Egyptian Medical Syndicate (EMS).

El-Zayat said in a Facebook post on Saturday that tests were conducted on 50 members of staff at the hospital, affiliated to Al-Azhar University, with the positive cases being identified.

The new infections are the latest among Egyptian healthcare workers, as nine doctors and five nurses have now died from the virus so far. Ehab Al-Taher, Secretary-General at the EMS told Daily News Egypt on Saturday that over 100 doctors have now been infected with the coronavirus.. The country’s total number of coronavirus infections has now surpassed 9,000 cases and over 500 fatalities.

Dozens of infections have been detected inside Egypt’s hospitals since the virus broke out in the country. Medical workers across the country are struggling on the frontlines as they continue fighting the disease

On Sunday, the Health Ministry reported 436 new coronavirus cases and 11 new deaths, raising the country’s total to 9,400 cases and 525 deaths. Up to 2,075 cases have recovered so far.

Sadek noted that new tests on 100 other workers who were in contact with positive cases will be conducted on Sunday, adding that a worker at the hospital’s kitchen is the source of infection.

Earlier on Saturday, the Nurses Syndicate announced that a fifth nurse has died of the coronavirus. Attyat Mohamed contracted the virus while on duty at the Damanhour Chest Hospital in Beheira Governorate.

Nurses Syndicate Head Kawthar Mahmoud said in televised comments that about 50 nurses in Egypt have been infected with the virus.

A video has gone viral showing nurses at the Bagour General Hospital in Menoufiya governorate calling for PCR tests to be carried out before returning to their families amid fears of contagion.

Menoufiya Deputy Governor Mohamed Moussa said in televised comments on Saturday that the governor has asked for PCR tests to be carried out on all workers at the hospital.

Meanwhile, 59 people in a Bahr El-Baqar residential area in Port Said have been quarantined for 14 days after three coronavirus infections in one family were detected. The family had been in contact with positive cases.

The Daqahleya Health Directorate said that new areas in the governorate have been placed under 14-day quarantine periods, after 17 new cases were detected in Nabaruh, two villages in Talkha and Kafr Allam village.