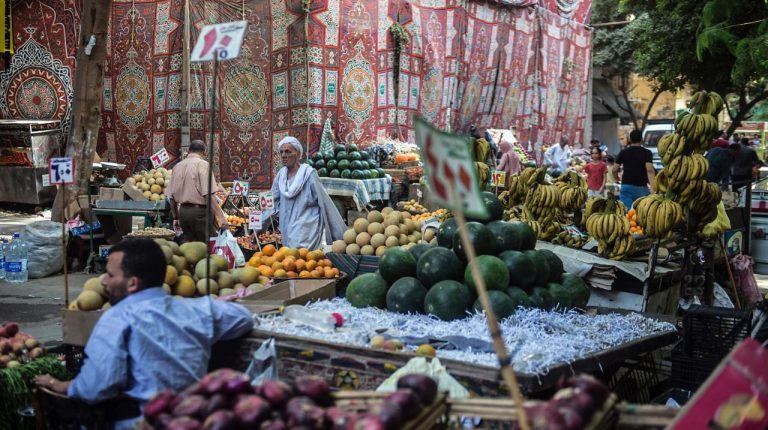 Egypt’s annual urban inflation increased to 5.9% in April, compared to 5.1% in March, the Central Agency for Public Mobilisation and Statistics (CAPMAS) announced on Sunday.

The CAPMAS report noted that the Consumer Price Index (CPI) reached 107.5 points in April, registering an increase of 1.6% over March.

The report comes ahead of the CBE’s next Monetary Policy Committee (MPC) meeting to decide on the fate of the Egyptian pound’s interest rate.

The MPC has kept on 2 April the overnight deposit and lending rates at 9.25% and 10.25%, respectively, whilst maintaining the main operation, credit, and discount rates at 9.75%.

In its statement accompanying the decision, the committee said that after reducing the basic interest rates by 300 basis points at its emergency meeting on 16 March, it saw that the current rates were appropriate and consistent with the CBE’s target inflation rate of 9% (±3%) in the fourth quarter of 2020.

Mohamed Abdel Aal, a banking expert and board member of the Suez Canal Bank, said the current interest rates may be consistent with the low inflation figures, and may have given a relatively reasonable boost to open the appetite of borrowers before the coronavirus shock kicked in but they not sufficient now to face the repercussions of the pandemic.

He explained that under the weight of the coronavirus’s repercussions, the Egyptian economic growth rate will decrease from 6% to 4.2%, and the budget deficit will rise from 7.2% to 7.9%, according to official estimates, meaning that we are definitely entering into a period of economic slowdown, for which a lower interest can combat best.

According to Abdel Aal, cutting interest will encourage the various productive sectors, especially those that are not benefiting from the CBE initiatives, to expand and operate, and that reducing the interest rates by 1% saves the Ministry of Finance approximately EGP 15bn, contributing to reducing the budget deficit by the same amount.

On the other hand, he added, large sectors of retail banking benefit from the rate cut, which stimulates the movement of derivative demand, and helps resist recessions.

Abdel Aal stressed that the decision to reduce rates will not negatively affect foreign investment, which has emigrated recently temporarily, and that the reduction does not affect negatively the entry of household sector deposits, where they have special saving vessels at special prices. Cutting interest rates could also be a practical solution to support the Egyptian Exchange to mitigate the need for financial support.

In light of this, he sees the need to cut the rates by 100 basis points in the upcoming meeting.

He emphasized that the MPC has the knowledge, experience, information, and visions to make the right decision that would be consistent with the existing global and local conditions.

Moreover, Radwa El-Swaify, Head of Research at Pharos Holding, said that the rise in inflation during April was seasonal due to the increase in food and beverage prices with the advent of the month of Ramadan.

She renewed her expectations that the MPC would fix the basic interest rates at its meeting next Thursday.

“Before taking any decision to change interest rates, the committee will first take into consideration market conditions, the impact of the previous rate cut, inflation rates and trends in light of what is happening recently, and in light of global developments,” she explained.

Annual core inflation slows to 1.5% in May: CBE

April inflation increased due to unfavourable base effects: CBE

US stocks jump after Fed on hold, encouraging news on antiviral drug