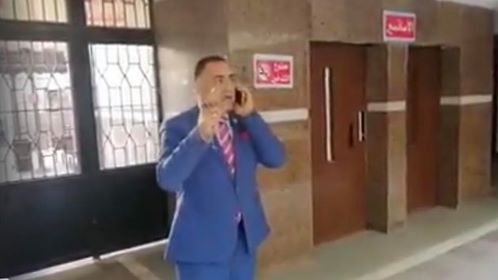 The Egyptian Medical Syndicate (EMS) condemned on Sunday the actions of Member of Parliament (MP) Elhamy Agina who “stormed” the Sherbin Hospital in Daqahleya governorate.

According to an EMS statement, Agina “verbally insulted the medical teams, inciting violence against them, as well as violating the privacy of patients and photocopying medical documents”

The EMS accused the MP, who is reported to have been accompanied by some of his supporters, of “violating the constitution and making propaganda for electoral purposes”.

Agina, who also violated the hospital’s infection control measures, has published a video on his Facebook page trying to slander the doctors.

The syndicate said it will take legal measures against Agina and will brief the Speaker of the Parliament, Ali Abdel Aal, on the incident.

The EMS statement described Agina as a person “who came out of oblivion in search of fame and propaganda for himself at the expense of those who give their lives for the heir patients”.

At 6pm on Saturday, Agina visited the Sherbin Hospital claiming there were no medical staff at the hospital, despite various doctors and nurses appearing in the video that he published, according to the statement of the hospital.

Agina accused the hospital of negligence and called on Minister of Health Hala Zayed to dismiss the hospital’s director. Agina’s statements were rejected by both Daqahleya’s medical syndicate, and the general syndicate.