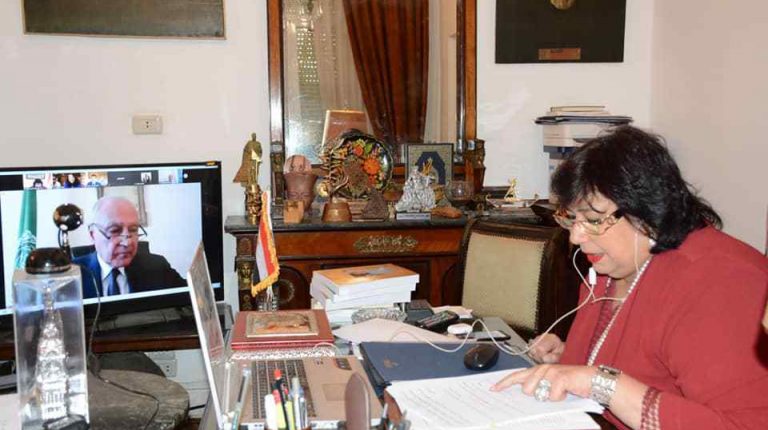 Egyptian Minister of Culture Ines Abdel-Dayem chaired the first extraordinary meeting for Arab Ministers of Culture on Monday to discuss the cultural impacts across the region of the coronavirus (COVID-19) pandemic.

The meeting was called by the Arab League (AL) Educational, Cultural and Scientific Organization (ALECSO). It aims to carry out resolutions adopted at the 21st conference of the Arab culture ministers, held in Cairo in October 2018.

Abdel-Dayem noted that Egypt was one of the first countries in the region to embark on precautionary measures necessary to protect citizen health.

She reviewed the ministry’s electronic “Stay at Home: Culture in Your Hands” initiative, which encourages citizens to respect the state’s precautionary measures against the coronavirus, promoting awareness of various genres of art.

Aboul Gheit praised all initiatives taken by the Middle East’s Ministries of Culture in providing cultural and heritage content online. Despite the respective initiatives which have targeted different segments of society, cultural life has been greatly affected by the lockdowns.

Ramírez added that the pandemic has halted ongoing efforts to preserve Arab culture, and has also caused cultural sites, especially those that rely on self-financing mechanisms, to economically stumble. He added that withholding society’s access to cultural sites and services negatively affects cultural awareness, and pointed to the repercussions of the crisis on various areas of life.

The meeting announced several recommendations, including using artificial intelligence (AI) and advanced technologies to digitise cultural content. This came in addition to calling for initiatives to support artists and cultural institutions affected by the coronavirus crisis.

Messi donates €0.5m to hospitals in Argentina to fight COVID-19