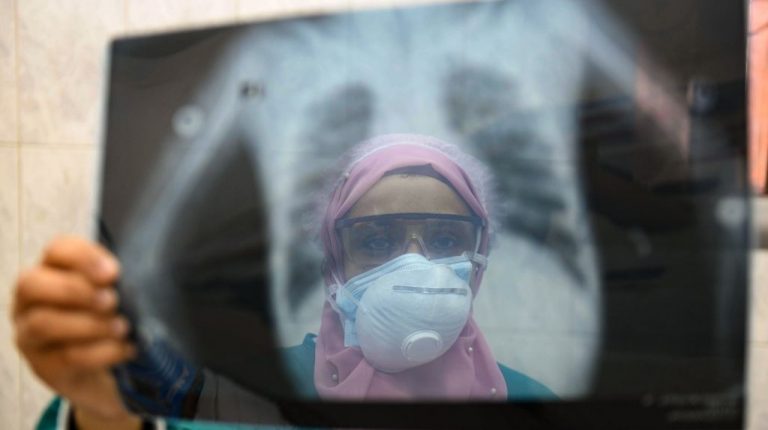 Rasha Helmy, a news sector employee at Maspero, died early Tuesday from complications of the disease. She has been transferred to a fever hospital several days ago.

The NMA announced in April the first case of Covid-19 among its employees of a healthcare worker at Maspero headquarters. Since that, the NMA has not revealed more information about new infections among its members.

Kawthar Mahmoud also said that there are “a number of Covid-19 infections” among nurses, without defining the exact numbers, adding that some of them recovered and resumed work. She said earlier in April that more than 50 nurses have tested positive for the virus at the time.

The Health Ministry reported 347 new coronavirus cases and 11 new deaths on Tuesday, raising the country’s total to 10,093 cases and 544 deaths. Up to 2,326 cases have recovered so far.

On Monday, Nevine El Nahas, head of the technical office of the Health Minister, tested positive for coronavirus, and was transferred to Abou Khalifa quarantine Hospital in Ismailia governorate.

In the meantime, Dr Ahmed Abd El-Aziz, head of the Ahmed Maher Teaching Hospital, said that 32 of medical staff and workers in the hospital tested positive for coronavirus. Abd El-Aziz revealed that a nurse contracted the diseases outside the hospital and infected her colleagues.

The nurse was quarantined, and after conducting several tests on other workers, it turned out that 32 of nurses, doctors, and workers, who were in contact with her, contracted the virus.

The new infections are the latest among Egyptian healthcare workers, as nine doctors and six nurses have now died from the virus so far. More than 100 doctors were infected, according to Ehab Al-Taher, Secretary-General at the Egyptian Medical Syndicate (EMS).

The EMS in Cairo, headed by Shereen Ghaleb, called on the Health Ministry in a statement to allocate a quarantine hospital to the medical staff and workers working at Cairo hospitals affiliated to the ministry.

Earlier this week, Ibrahim El-Zayat, a board member at the EMS, revealed that 35 medical workers at Al-Zahraa University Hospital, affiliated to Al-Azhar University, have tested positive for the coronavirus.

The head of Al-Azhar University decided on Monday to temporarily shut down the Al-Zahraa Hospital.

On the other hand, Dr Hossam Hosny, head of the health ministry’s scientific committee, said that he hoped that a full lockdown be imposed during the last week of Ramadan and Eid Al-Fitr holiday.

Hosny added in televised comments to Cairo Now TV show that they did not want a long-term full curfew, but only for two weeks to curb the outbreak of the disease.

Hosny said that a suggestion of the lockdown was submitted to “the political leadership,” adding that the government would be able to take the right decision whether to impose a lockdown or not.

In the meantime, Honsy revealed that seven families in Fayoum governorate have tested positive for the virus, urging citizens to commit to social distancing and personal hygiene even inside their houses.

Information Minister announces night time curfew from 8pm to 4am