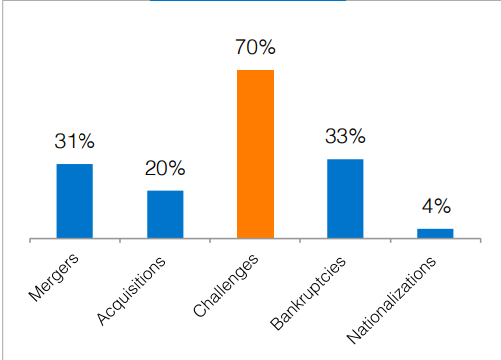 Real estate developers remain more optimistic than brokers and consumers despite the global impacts of the ongoing coronavirus (COVID-19) pandemic, according to a sample survey by Aqarmap.

The real estate marketplace prepared a sample survey with insights from one of the most comprehensive studies ever conducted on Egypt’s property market. The survey took a holistic 360 degree approach, gathering insights and findings from stakeholders developers, brokers, and consumers.

The report said that brokers wish to receive higher commission during the crisis, due to the increased complexity of closing deals.

“Brokers also had concerns that developers might resort to delaying paying their commissions due to the crisis cash crunch,” the report said. “A total of 50% of developers indicated no planned changes in how they pay brokers’ commissions.”

The report added that 40% of developers do expect to have delays in paying brokers, so they can manage their cash flow management during this crisis.

“Most consumers plan to hold on to their cash during the crisis, either due to their fear that the financial sector might face issues, or just to have their cash accessible in case of any medical emergencies,” the report said, adding, “Many buyers are still planning to invest in Gold and Property, with limited interest in buying dollars or stocks. However, these trends are not the same when looking at different segments.”

Aqarmap also said that, as companies worldwide have started to layoff and furlough employees during the crisis, it is anticipated that some property developers in Egypt will take similar action.

The majority of developers see that the most practical support they can get from the government is in the form of delaying their land instalments. Moreover, some prefer relaxing regulations, while others would like the government to accelerate its steps to get banks to finance consumers and increase market liquidity, the report noted.

“Developers were accurate in forecasting that consumers are mostly going to hold onto cash, as 54% of consumers indicated that they plan to hold onto their cash during the crisis,” Aqarmap said, “However, what is different is are the preferred investment assets consumers stated they wanted to invest in.”

The report noted that although developers expected consumers to invest in property,  consumers tended to prefer to sink their cash into gold.

Aqarmap added that developers plan to mostly offer a combination of discounts and longer payment plans. Although this is in line with consumer wants, according to the study’s results, they also preferred and expect discounts over longer-term payment plans. This might be the time when developers would have to show more flexibility with their pricing strategies.

While a third of developers expect to see mergers or bankruptcies as this crisis forces the market to consolidate, the majority expect that some developers will face financial challenges due to the crisis cash crunch.

It is remains unclear how developers who face such financial challenges will cope, but it is apparent that a bumpy road lies ahead for developers with weak balances sheet.

Developers plan to mainly reduce, by 50% to 75%, marketing and construction costs during the crisis, with planned reductions of 25%-50% following on the planned reduction. There are some slight differences in plans depending on the location each developer is mostly focused on.

The report explained that outdoor marketing and exhibits marketing are the channels most impacted by current circumstances, as developers significantly reduce their spending on these mediums.

Developers indicated their plans to continue increasing their spending on digital marketing, as consumers are expected to spend more time online while in lock-down.

Most developers expect the peak drop in April, at an average of -58%. However, the forecasts differ when slicing the data by segment or by the main location where the developer is currently active, the report noted.

Accordingly, brokers tend to have a unique view on the market because they work with a variety of developers and consumers.

The overall market shows that though investors and immediate delivery buyers were the most active, results from specific locations are strikingly different.

The report also highlighted that demand from expatriate Egyptians abroad has declined during the crisis. Pre-coronavirus, Egyptian expatriates accounted for 45% of those searching for properties online. With the crisis ongoing and the near future remaining uncertain, this group now accounts for only 17% of online searches.

In terms of the gender of buyers, statistics here have not changed significantly as a result of the crisis. The search for properties has typically been dominated by men, accounting for 60% of searches, and they are also more inclined to initiate first contact with developers. However, the report noted that women remain important players in the decision making process.

Moreover, the most active age bracket is the 25-35 range. However the importance of segmenting the market on age bracket becomes apparent when the bonus breakdown dependant on location is added.

With this breakdown in mind, it can be seen that the most active age bracket differs based on location, with a tendency towards the older age brackets in second home destinations.

The majority of active buyers are first time home buyers, some of whom are newly weds or simply those who are finally entering the housing market. The next segment focuses on those who already have a property, and who are active during the crisis primarily because they want to upgrade and move to a better property or location. Investors who typically own many properties have not been very active during the crisis.

In general, the leading objective in the property market is first home purchases, although the bonus segment breakdown shows how the objective differs by segment. The buyers assigned to the A and B socioeconomic statuses, and who are active during the crisis, are mostly buying to upgrade their home. Those in the C socioeconomic status, however, are mostly buying their first home, the report explained.

“There is no major difference in finishing preferences pre-crisis and post-crisis, as in our previous studies, we found the breakdown to be very similar,” Aqarmap said. “However, the segment and location breakdown show different preferences for different audiences.”

Aqarmap noted that 20% of the buyers are serious and are ready to buy, although there is a huge segment representing 40% of all active buyers during the crisis who are opportunistic and are seeking offers with the expectation that prices might drop.

This segment is also counting on developers offering unique discounts or payment plans that would entice them to buy. Others are using the lock-down period to research and understand the market offerings well before making a move.

Regarding property price hikes, the report added, “There is an expectation that prices will decrease, the majority expect just a small decrease, and others are optimistic and full of wishful thinking. Very few expect prices to increase during the crisis.”

Demand for property in Egypt drops 7% in July: Aqarmap

Private sector increases spending on digital marketing due to COVID-19