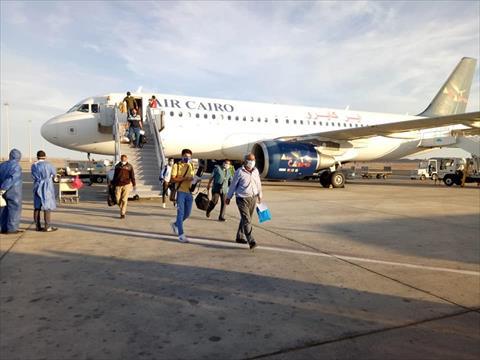 Egypt’s embassy in Lebanon has announced that eight exceptional flights will take place to repatriate about 1,400 Egyptians stranded in Lebanon, upon their request, according to the Middle East News Agency (MENA).

The embassy said the flights will take place between 3-5 June, with four flights carrying 600 stranded Egyptians scheduled for the first day. This comes in addition to four other flights on 4 and 5 June, carrying the other 800 Egyptians, MENA added.

It added that it is accepting requests from citizens who wish to return home, of which it has so far received over 1,400 people.

The embassy noted that it is giving priority to citizens who have breached Lebanon’s residency system, including those whose passports hold exit stamps or who have overstayed their residence permits.

Since the start of the coronavirus (COVID-19) outbreak, Egypt has been keen to repatriate its citizens stranded abroad, due to the suspension of international flights.

In earlier remarks, Prime Minister Mostafa Madbouly said the total number of Egyptians repatriated in the current period is almost 16,000.

All Egyptian returnees have been required to undergo a quarantine period, initially for 14 days, either in quarantine hotels or university dorms. However, earlier in May, the quarantine department at Cairo International Airport, affiliated with the Ministry of Health, reduced the mandatory quarantine period at government isolation units to seven days.

It said that returnees who test negative at the end of the seven-day period will be allowed to spend the rest of their quarantine period at home.