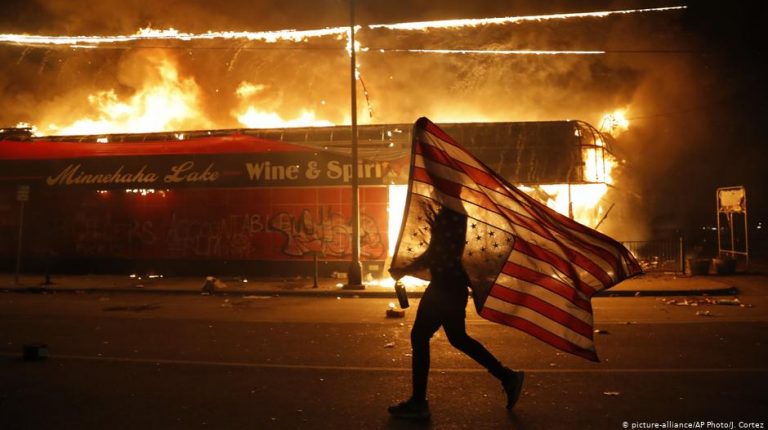 US President Donald Trump underlined his willingness on Saturday to bring in military intervention against protests that have rocked cities across the country for much of the past week.

The protests erupted following the death of an African-American man, George Floyd, at the hands of white policemen.

On Sunday, US presidential candidate Joe Biden condemned the violence during the protests, but added that Americans have a right to demonstrate, according to the Associated Press (AP) news agency.

“Protesting such brutality is right and necessary. It’s an utterly American response,” the Democratic White House hopeful said in a statement. “But burning down communities and needless destruction is not. Violence that endangers lives is not. Violence that guts and shutters businesses that serve the community is not.”

On Twitter, Trump wrote that the federal government will use “the unlimited power of our military” as well as carry out arrests.

The Pentagon said it was ready to provide military help to contain unrest in Minneapolis, the state capital of Minnesota, and the city where Floyd was killed. However, US media reported that so far, Minnesota governor Timothy Walz has not requested it.

Should Walz request this, federal forces would likely primarily comprise of military police to provide logistical support. They would, however, not get directly involved, defence officials told the AP.

On Saturday, Walz moved towards a full mobilisation of the state’s National Guard for the first time since World War II. He vowed a show of force to shut down unrest that has seen vehicles and buildings destroyed.

“The situation in Minneapolis is no longer in any way about the murder of George Floyd,” Walz said. “It is about attacking civil society, instilling fear and disrupting our great cities.”

“We are under assault,” he added. “Order needs to be restored.”

Siemens and GE sign deals to provide electricity to Iraq