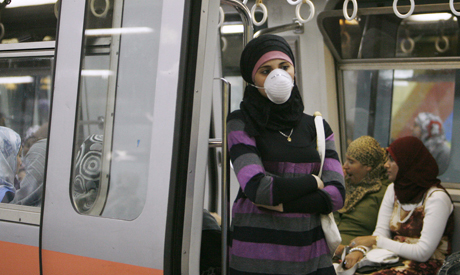 The Egyptian Company for Metro Management and Operation has announced it will provide face masks to commuters at symbolic prices, according to a company official.

Ali Fadali, chairperson of the metro’s operating board, said in televised remarks on Egyptian Channel One, Tuesday, that any commuter not wearing a face mask will be accompanied by security to buy one from ticket windows.

Fadali said that thermal detecting equipment to detect fever and elevated body temperatures have yet to be installed at metro stations.

He added that at pre-pandemic levels, about 2.5 million commuters rode the metro on a daily basis. However, with precautionary measures and the night curfew in effect, commuter numbers have reduced to nearly one million, with Fadali noting the difficult logistics of examining that level of commuters on a daily basis.

In the meantime, some public transport companies have provided commuters with face masks with at wholesale price, or around EGP  3.

The Public Transport Authority (PTA) has also announced that it will offer face masks at wholesale price at all main bus stations, including the Abd El-Moneim Riad Bus Station, and the Ahmed Helmy Bus Stations.

A PTA official said on Monday that commuters are required to wear face masks before riding buses. If they do not have one, they will be required to buy them from the bus station or from the driver.

Starting on 1 June, the government reduced the night-time curfew by one hour for two weeks, with the new timings from 20:00 to 5:00.

Face masks are also obligatory in all public spaces, including markets, commercial shops, banks, public and private installations and on public transport. Violators will face a fine of EGP 4,000.