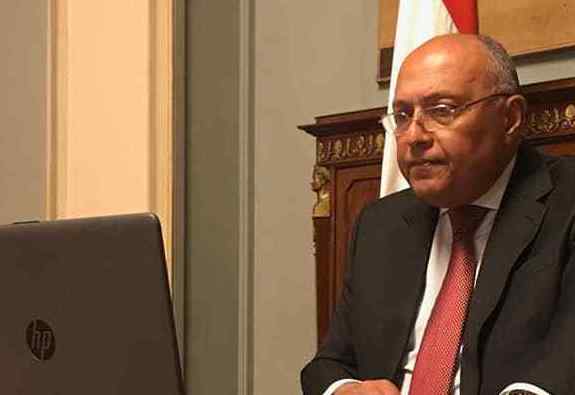 Egypt has strongly rejected attempts to use Yemeni lands to threaten regional security, Foreign Minister Sameh Shoukry said during the Donors’ Conference for Yemen 2020 on Tuesday.

In his speech, Shoukry also stressed Egypt’s condemnation of attempts to obstruct free and secure navigation in the Bab al-Mandab strait which affects regional and international security and stability.

The Saudi-organised conference was held via video conference, in partnership with the United Nations (UN), a Ministry of Foreign Affairs spokesperson said.

Shoukry also referred to Egypt’s position on the Yemeni crisis, which looks forward to a political settlement that preserves Yemen’s unity, sovereignty and territorial integrity.

Shoukry started his speech by emphasising the meeting’s importance in coordinating efforts to provide humanitarian support to the Yemeni people.

His comments came as about 24 million Yemenis are now in urgent need of humanitarian assistance as they suffer from a lack of food, medicine and basic needs. There are also the burdens of the ongoing conflict in Yemen and a crumbling health system struggling to cope with the effects of the coronavirus (COVID-19) outbreak.

Shoukry expressed appreciation for the role of Saudi Arabia and the United Nations Office for the Coordination of Humanitarian Affairs in organising this meeting.

The minister affirmed Egypt’s continuous support of Yemenis. He noted that Egypt currently hosts over one million Yemeni citizens, who receive the same educational and health services as Egyptians.

He added that Egypt recently announced it would receive “mercy trips”, to transport patients from Yemen to receive the necessary health care in Egyptian hospitals. This would come in addition to facilities provided by Egyptian authorities to grant visas to Yemeni citizens for educational purposes.

Saudi Arabia has pledged $500m to the humanitarian response plan in Yemen. Of that, $300m would be allocated to UN agencies and organisations. The remaining $200m would be given to the KSrelief, Al-Rabeeah explained.

Addressing the attendees, Yemen’s Prime Minister Maeen Abdulmalik thanked Saudi Arabia for its $500m in support. He also expressed his gratitude toward KSrelief for its pioneering role in Yemen during recent years.

The Yemeni premier highlighted the difficult humanitarian situation his country is facing, in light of the ongoing conflict and coup undertaken by Iran-backed terrorist Houthi militias.