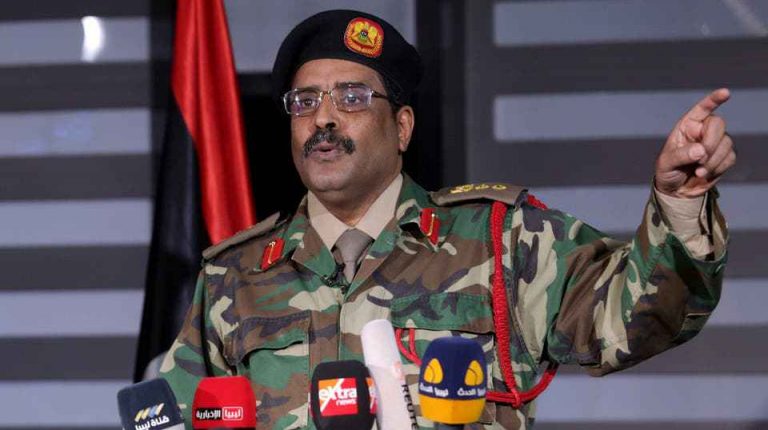 Libyan Arab Armed Forces (LAAF) spokesperson Ahmed Al-Mesmari said they would return to dialogue subject to the complete exit of Turkey and terrorist elements from Libya.

Al-Mesmari also welcomed on Tuesday evening any international political initiatives to resolve the crisis in Libya.

He noted that the General Command of the LAAF will deal with all countries that offer solutions to the Libyan crisis, away from the control of militias and mercenaries.

Meanwhile, Fayez Al-Sarraj, Prime Minister in Libya’s internationally-recognised Government of National Accord (GNA), noted that he had no vision for a solution in the country.

During a video conference meeting with journalists, Al-Mesmari said, “There is no truth to any differences between the general leadership and the presidency of the Libyan parliament.”

He added that LAAF Commander Khalifa Hafter’s announcement of an end to the political agreement in Skhirat does not mean a dissolution of the Libyan parliament.

On Tuesday, the United Nations (UN) said it expects movement in the Libya situation in the next few days following its Monday announcement that the country’s warring parties agreed to resume ceasefire negotiations.

The agreement to restart the negotiations comes following a period of heavy fighting in the country.

Egypt and the UAE have welcomed the UN’s announcement that the rival Libyan parties agreed to resume ceasefire talks.

Both countries have reaffirmed their commitment to a political solution in Libya that supports peace, security and stability. This would take place under the supervision of the UN and the Berlin Conference on Libya.

The UAE and Egypt also reaffirmed that they stand with the Libyan people and all parties calling for ceasefire to save innocent lives and to achieve stability in Libya. This would particularly boost the continuation of humanitarian efforts to combat the ongoing global coronavirus (COVID-19) pandemic.

Both Egypt and the UAE have underlined that the political process is the only solution to achieve peace in Libya, and to maintain unity and territorial integrity. They reiterated adherence to a political solution that would support peace, security and stability in all parts of Libya.