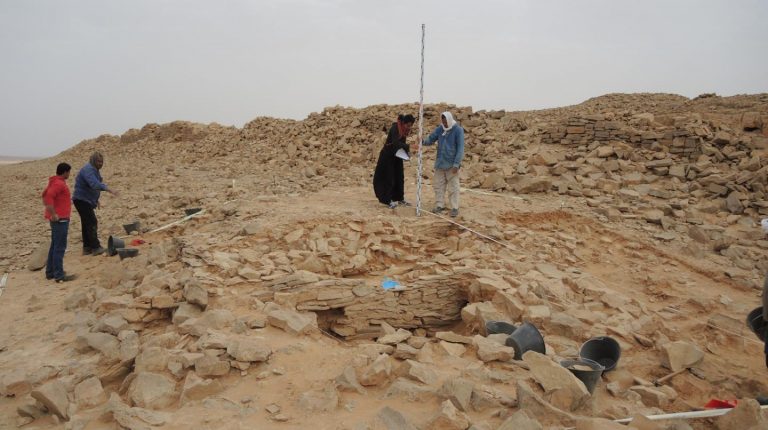 Arabia’s megalithic monuments made of dry stone walls remain largely unknown, despite holding many secrets in terms of their construction, function and chronology.

A recent article presented the results of studies on a 35m-long stone platform, overlooking the Dûmat al-Jandal oasis in modern-day northern Saudi Arabia, and which was first constructed in the mid-sixth millennium BC.

Published in the journal Antiquity on Tuesday, the study showed that the platform had been refurbished at least twice for expansion in its history.

The study also found that mortuary deposits had been made there from the beginning of its use. Researchers have dated tombs in the vicinity, which show continuous occupation in the area for millennia.

The discovery and analysis of this monumental platform provides a better understanding of the antiquity of the area’s occupation It also indicates that pastoralist populations have traditionally called this area home, according to Olivia Munoz, of the Centre National de la Recherche Scientifique (CNRS) in Paris, and the paper’s lead author.

“Generally speaking, however, these structures are difficult to date in the absence of datable remains or extensive investigations,” Munoz told Daily News Egypt, “In addition, our study gives indications on the probable ritual and funerary and commemorative functions of this type of monument, which are very numerous in Arabia and the southern Levant, but remain largely unstudied.”

To gain a better understanding of and accurately map the region, Munoz and her team used various techniques, including excavations with architectural and stratigraphic observations. Aerial images were also brought in for study alongside a survey carried out on foot. The team carrying out the study also relied on numerous radiocarbon dating studies carried out on charcoals and human bones found at the site.

Munoz noted that what was most striking in this study was to have been able to show that the use of this monument probably extends over several millennia. Not only does this present its regular use, but also a persistence of the symbolic practices of populations occupying the area.