Egypt’s recent improvements in governance and policy effectiveness shore up the sovereign’s resilience to the shock of the coronavirus (COVID-19) outbreak, according to a recent Moody’s report.

The credit rating agency noted that the global pandemic has triggered Egypt’s capital outflows, but, like in 2018, the domestic market has mostly absorbed the shortfall.

Reforms since then and sufficient liquidity in the banking system will limit a rise in borrowing costs similar to 2018. A temporary return to shorter maturities and larger borrowing requirements, however, will increase roll-over risks. 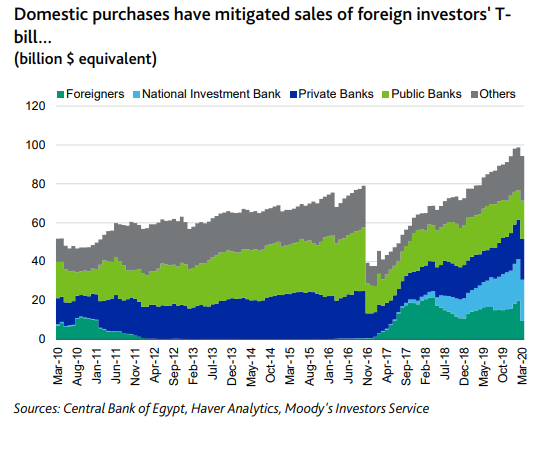 Egypt’s external risks will remain relatively contained as foreign-exchange reserves, boosted by a recent Eurobond and access to official lending, sufficiently cover the economy’s external liabilities over the next few years, Moody’s added.

Moody’s expects that the general government debt/GDP ratio will temporarily rise to around 85% in fiscal year (FY) 2020/2021. It will then resume its declining trend from a peak at over 103% of GDP in 2017.

“While we forecast a cyclical growth recovery from the first half (HQ) of FY 2020/2021, there is a high risk that global and/or local lockdown measures persist for longer than we expect, which could weigh heavily on economic activity and the balance of payments,” Moody’s added, “Conversely, upward pressure on Egypt’s credit profile could develop if there is increasing evidence that Egypt’s credit metrics are broadly resilient to financing shocks, in part because of more credible and effective policy, and an improvement in competitiveness evidenced by a sustained improvement in the labour market and in non-hydrocarbon exports.”

The report said that Egypt, like other emerging markets, has experienced a sharp bout of capital outflows that started in the second half of February. This came amid sharply tightening financial market conditions.

This volatility has largely manifested itself in the sale of non-resident holdings of T-bills. The scale of the sell-off is in line with previous bouts of volatility, as was seen in H2 of 2018, albeit in a much shorter time frame.

Additionally, the report highlighted that progress on the government’s fiscal and monetary reform agenda over the past few years is likely to limit an increase in borrowing costs akin to 2018.

In particular, the Central Bank of Egypt (CBE) has taken a tight monetary policy stance and a relatively stable exchange rate. These have supported disinflation after the completion of energy subsidy reform in July 2019.

However, the abrupt shift to domestic creditors and increased borrowing requirements due to the current crisis have caused a temporary setback for the government’s maturity-lengthening strategy in the local currency market and increased rollover risks. By contrast, pressures on Egypt’s external position are more contained, the report noted.

It added, “Egypt’s Minister of Tourism and Antiquities recently indicated that the coronavirus would generate tourism losses worth $1bn a month to the Egyptian economy. This will more than offset the savings from weaker imports and lead to a widening in the current account deficit to 4.5% of GDP in FY 2019/2020, before it falls gradually to 3.6% in FY 2020/2021. That said, we expect a cyclical recovery in H1 of FY 2020/2021 that allows growth recover to pre-crisis trends.”