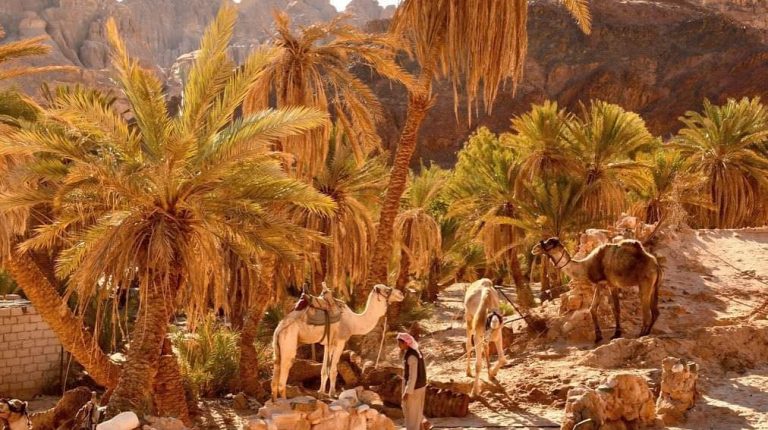 Take a trip 70kms into the heart of the Sinai Desert, and you will find the Ein Khudra Oasis, located in a hidden basin, connected to a sandy plateau above, and the St Catherine Road by the White Canyon.

Habitation at the Ein Khudra Oasis dates back to Roman times, when caravans of pilgrims passed through the oasis to make use of its waters. With a bountiful supply of underground wells filled with potable water, the pilgrims depended entirely on the Ein Khudra Oasis’ water as they moved through Sinai’s unforgiving terrain on their way back to Rome.

The beautiful oasis has a pure natural lake and is characterised by its endless supply of natural treasures.

It isn’t just the natural jewels that attract interest too. There is a legend that talks of the existence of a huge treasure trove of gold buried thousands of years ago under the oasis’ sands by Egyptians of old. Needless to say, the treasure has yet to be found, staying hidden under the sands, and the legend remains firmly that – a legend.

It does not deter, however, the many people who believe in this legend going every year to try and uncover this treasure.

The oasis is surrounded by mountains and the sea with wonderful rock formations, that come together to create a wonderful panoramic view of the mountain tops, the trees and granite rocks.

Because the oasis sits like a green paradise in the heart of the desert, it was called El Khudra which translates as ‘the place has many plants’. It boasts many species of birds, animals, and trees, which increase the oasis’ splendour and beauty. The many palm trees, olives, and acacia trees that surround it from each side form a wonderful shape, giving the oasis a true feeling of calm surrounded by the desert.

Storks, hawks and eagles can also be found in the oasis, in addition to rabbits, mules, foxes, wolves, Arabian hedgehogs, and spiny mice.

Only a few hours drive away from Dahab, Ein Khudra is famed for its natural beauty and splendour as well as its Bedouin atmosphere. It has a number of Bedouin tents that receive visitors, giving them a true taste of the wonderful desert atmosphere and the calming effects of nature.

The marvellous oasis is also a beautiful example of what an oasis is, with several natural hot water springs bubbling up from the ground that have been there since time immemorial.

And although the oasis is based on an outcrop of groundwater, the cave where the water emerges used to have water overflowing from it. Due to the levels of groundwater lowering, it is now far from overflowing, and the spring is no longer there because the level of the groundwater has lowered.

With only the rustling leaves of palm trees and guava trees the most amount of noise you are likely to find there, you can join the few Bedouin who live in Ein Khudra with some goats.

According to legend, the oasis of Ein Khudra has been put forward as having a potential connection with the place mentioned several times in the Old Testament as Hazeroth, or in the Quran as the Exodus of Israel. This was also the Biblical site of the Israelite’s forty-year wanderings in the Sinai Peninsula.

Sadly, the oasis is not marked on most maps, leaving it mostly hidden from the trail of visitors. If you do find yourself wending your way to it, the best time to visit the oasis is during winter, when it is fully green, and people can see weeds and bright trees that have woken up on the back of the rains bursting out into a wonderful, dazzling view.

Sculpted in the Sun: Bahariya’s Black and White Deserts