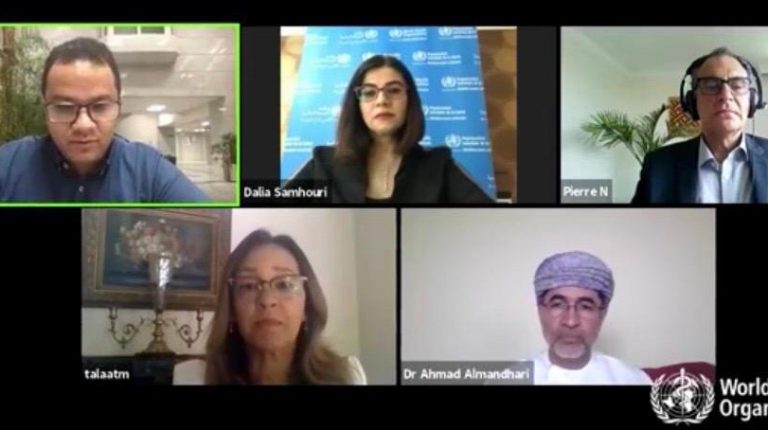 The World Health Organization’s (WHO) Eastern Mediterranean region has reported almost 670,000 coronavirus (COVID-19) infections and over 15,000 deaths, according to the WHO’s Regional Director for the area, Dr Ahmed Al-Mandhari.

In an announcement made on Wednesday, Al-Mandhari added that the Eastern Mediterranean region’s figures for the virus make up almost 10% of the global caseload.

“While cases across Europe are decreasing, and the global media is reflecting less alarm as a result, the number of cases in other parts of the world continues to increase, including in our region,” he said during a press conference.

Al-Mandhari said that, at the regional level, the organisation has observed a regular increase in the number of reported daily cases, with an acceleration observed during the past three weeks.

“Over the past week, more than half of all new cases in our region were reported in Pakistan, Iran, and the Saudi Arabia, while other countries are reporting increasing numbers of cases,” he added.

Al-Mandhari also confirmed that as many countries in Eastern Mediterranean region start to ease restrictions, there is a risk that cases will continue to increase.

The WHO urges all countries easing restrictions to ensure that these measures are implemented following evidence-based risk assessments.

“Without proper precautions and monitoring, there is a real threat of COVID-19 resurging in countries that are seeing a decrease in the number of cases,” he explained.

Al-Mandhari added that a possible treatment for the virus, which proves to be both safe and effective in combating it, has yet to be made. However, clinical trials on Hydroxychloroquine, have recently restarted following temporary pause over concerns on side-effects. Over 100 countries are now participating in the trial, including Iran, Saudi Arabia, Lebanon, Pakistan and Kuwait.

Dr Pierre Nabeth, said that, despite an increase in coronavirus cases being reported worldwide, the figures only reflect those cases that have been confirmed. He added that figures for reported infection rates could be inaccurate due to a lack of testing capabilities or not possible as a country may be experiencing conflict.

“By reducing contact between people, we reduce the infections and the transmission of the virus,” he added.

Nabeth explained that in case countries still have increasing infection rates, restrictions should be enforced to avoid the problem getting worse. He added that, as countries worldwide have recently begun to ease, it is hard to judge whether infection rates will increase or not.

He confirmed that although the coronavirus’ incubation period is between two and fourteen days, this is not fixed and can vary from one person to another according to several factor. With the increase in infections and continued scientific research into the virus, the incubation period will be narrowed down to a specific time period.

Nabeth said that in Egypt, “we need to conduct tests for antibodies in order to detect the number of infected cases”.

Dr Dalia Samhouri, WHO Programme Area Manager for Emergency Preparedness and International Health Regulations, said that for any country to announce its control of the epidemic, it must wait for one or two incubation periods to occur.

This would mean authorities proceeding through 14 days for each incubation period, during which the country should not have any new coronavirus infections.

She added that the basis for easing restrictions is evidence-based assessments of health, economic and social risks.

Al-Mandhari said that more than six months into this pandemic, this is not the time for any country to take its foot off the pedal. It is, instead, the time for countries to continue to work hard, on the basis of science, solutions and solidarity.

He added that the cornerstone of every country’s response and defence against the virus must be to find, isolate, test and care for every case, and to trace and quarantine every contact.

“Most people globally and in our region are still susceptible to infection, and we continue to urge active surveillance in all countries, to ensure the virus does not rebound, especially in mass gatherings of all kinds which are starting to resume in some countries,” he asserted.

Al-Sisi follows up on COVID-19 in Egypt, updating treatment protocol