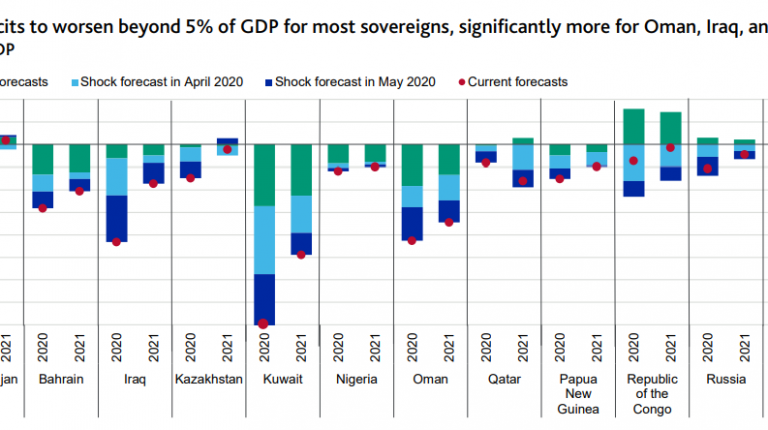 Moody’s expects a continued depression in oil prices that will exacerbate pressures on oil exporters, despite recent increases in prices.

It also expects oil prices to remain below pre-coronavirus (COVID19) levels, as long-lasting changes to oil-intensive travel and transport, in particular, have lowered oil demand for several years to come. The company’s medium-term oil price assumptions are now $45-65/bbl, compared with $50-70/bbl in March.

Moody’s said that credit risks are more intense for Oman (Ba2 RUR-), Iraq (Caa1 stable), Angola (B3 RUR-), and the Republic of Congo (ROC, Caa2 stable). This is due to limited fiscal space and heightened liquidity pressures, which is reflected in Moody’s ratings and ratings reviews. H

However, sovereigns with greater policy flexibility and larger fiscal and foreign currency buffers are in a better position to weather a longer period of lower oil prices.

The report noted that Iraq and Oman will see both their fiscal and current-account deficits widen by a further 5 percentage points (pps) of GDP in 2020 and 2021. This will occur subject to an absence of additional policy measures, compared to the company’s estimates in April.

Meanwhile, Kuwait and Saudi Arabia are among higher-rated sovereigns where Moody’s expects the most significant negative credit pressure.

“Sovereigns with a demonstrated track record of being able to reduce spending are in a better position to manage the shock. Currency flexibility (Russia, Kazakhstan (Baa3 positive)) or the presence of large sovereign assets (Azerbaijan (Ba2 stable), Kazakhstan, Qatar (Aa3 stable), and the United Arab Emirates (UAE, Aa2 stable)) and foreign-currency reserves will also provide a buffer,” the report read.

It added that by contrast, sovereigns whose capacity to adjust to a deep and potentially durable shock is limited, such as Oman, Iraq, and the ROC. Those with already heightened liquidity pressures and very limited buffers, such as Bahrain (B2 stable), are most at risk.

The credit profiles of Oman and Angola have deteriorated, with Moody’s March reviews for downgrade assessing the extent to which the deterioration may no longer be consistent with the current rating level.

“We changed Saudi Arabia’s and Trinidad and Tobago’s (T&T, Ba1 negative) outlooks to negative because of increased fiscal pressure and uncertainty over the government’s ability to stabilise debt in the medium term,” Moody’s said, “In Kuwait, the review for downgrade was initiated because of increased uncertainty given (1) the significant decline in government revenue resulting from the sharp decline in oil prices; and (2) weak governance leading to heightened uncertainty that the government will be able to access sufficient sources of financing at a time when its needs have increased significantly.”

A number of sovereigns have sound starting fiscal positions and a demonstrated track record of being able to reduce spending.

However, some sovereigns most exposed to low oil prices were already running sizeable deficits before the coronavirus shock, such as Iraq and Oman.

Moody’s expects a number of low-rated oil producers including Bahrain, Oman, Iraq, Angola, and the ROC to cut capital spending out of necessity. This is unlikely to be sufficient to offset large revenue declines, Moody’s noted.

“As a result, debt burdens of these sovereigns are likely to increase materially relative to our previous expectations,” the company disclosed.