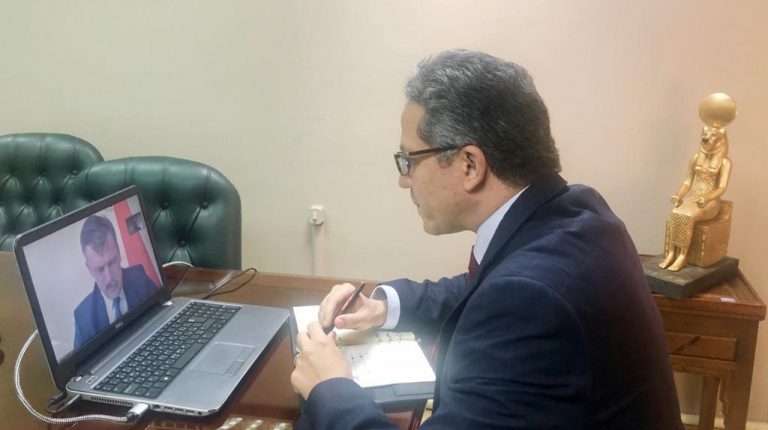 Minister of Tourism and Antiquities Khaled El-Anany and his Belarusian counterpart Sergei Kovalchuk held a virtual meeting to discuss means of boosting tourism cooperation between the two countries.

During the meeting, the two ministers discussed means of cooperation, the preparations, and precautionary measure requirements needed in both countries to resume the movement of tourism in early July.

The discussions took place with a focus on Egypt’s most important tourist destinations to the Belarusian side, namely coastal tourist cities in the Red Sea and South Sinai governorates. It is reported that 90% of Belarusian tourists to Egypt prefer to travel to these governorates.

At the beginning of the meeting, El-Anany was keen to establish with Kovalchuk the rules for resuming tourism from Belarus, and whether there were any special requirements for tourism to Egypt to occur.

For his part, Kovalchuk pointed out to the importance of tourism relations between the two countries, stressing that Egypt is key tourist destination for Belarusian tourists.

He emphasised his keenness to send a media delegation to Egypt’s coastal tourism destinations to launch a media campaign promoting Egypt’s attractions.

Kovalchuk also invited El-Anany to participate in the tourism exhibition that his country intends to organise in the next few months, which El-Anany welcomed.

At the end of the meeting, the two sides agreed to intensify bilateral communications, especially at the technical level, between representatives from the two countries. It is anticipated there will be further tourism-related meetings between Egypt and Belorussia in mid-June. The meetings will include additional discussions on the health and safety controls and precautionary measures needed to keep the coronavirus at bay.