Since President Abdel Fattah Al-Sisi took office in 2014, Egypt’s industrial sector has seen considerable improvements, on the back of its prioritisation by the government.

The notable efforts to improve the industrial sector come in recognition of its being Egypt’s engine of economic development. It is also regarded as one of the most important pillars to achieve social stability, by providing job opportunities, increasing personal income, and improving living standards.

The Ministry of Trade and Industry reported that total exports of Egyptian products in 2015 amounted to about $18.6bn. By the end of 2019, this figure had significantly increased to a total of $25.6bn. 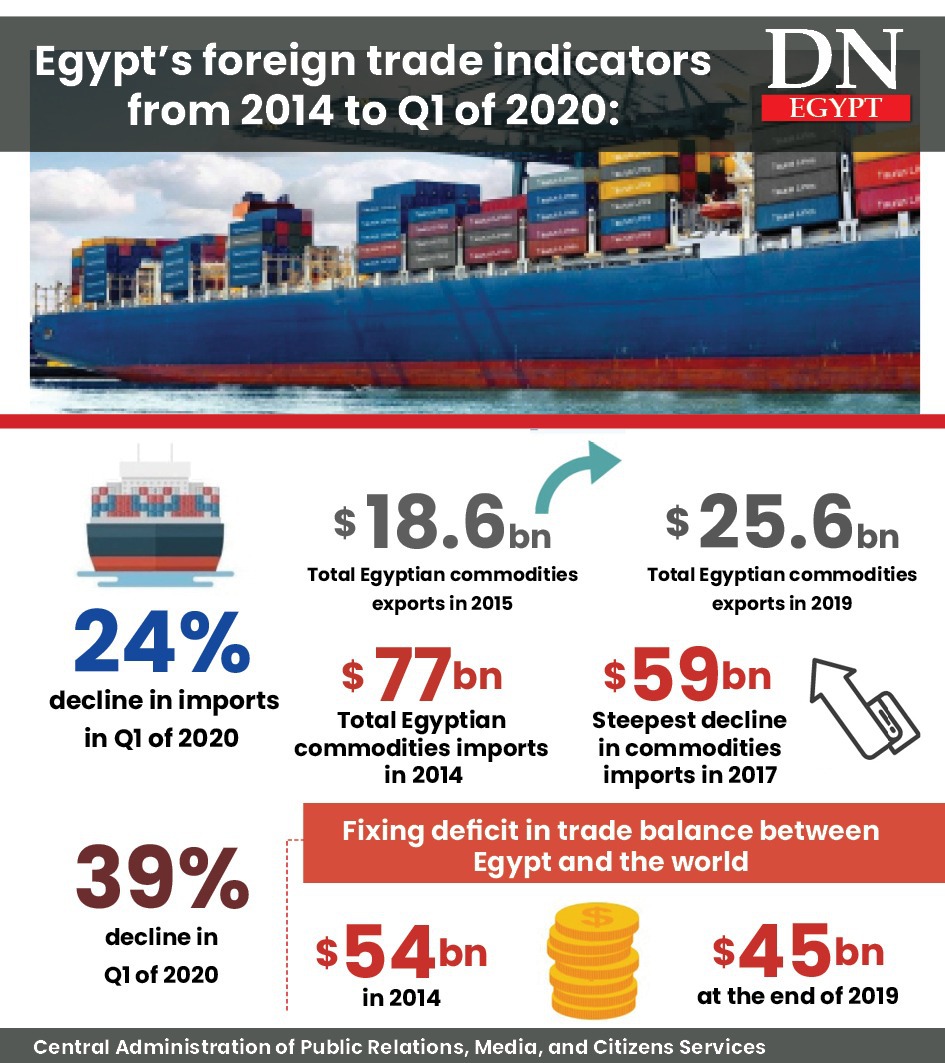 Meanwhile, imports to Egypt have declined, registering $77bn in 2014, and further decreased to $59bn in 2017. Figures for the first quarter (1Q) of 2020 confirm that the value of imports continued its, downturn, falling by 24% compared to the same period in 2019.

The ministry said, “These positive indicators contributed mainly to fixing Egypt’s trade imbalance with the other countries, which registered approximately $45bn by the end of 2019, compared to $54bn in 2014. Moreover, indicators for 1Q 2020 confirmed this decline, as it fell by 39% compared to the same period in 2019.”

The Industrial Development Authority (IDA), which falls under the Ministry of Trade and Industry, established 17 industrial parks in 15 governorates, at a total investment cost of nearly EGP 10bn.

To increase Egypt’s industrial outputs, three new industrial cities were established. This includes the Robbiki Leather City on an area of ​​511 feddan, of which the first phase has been completed.

“Approvals and licences were also granted to establish new factories and expansions at existing factories, totalling 17,140 industrial establishments, at an investment cost of EGP 44bn and providing 140,000 job opportunities,” the Ministry of Trade and Industry said. “With regard to operating and building licences and the industrial records, the IDA granted 39,914 operation licences, 3,684 building licences and 45,260 industrial record certificates from June 2014 to March 2020.”

Under the Al-Sisi presidency, Egypt has joined the African Continental Free Trade Area (AfCFTA) and the Mercosur Free Trade Agreement, in addition to beginning negotiations with the Eurasian Union.

The ministry noted that that it has succeeded in issuing a new Industrial Licensing Law, launching the first integrated map of industrial investment. At the same time, it has issued executive regulations for the law concerning imposing a preference for Egyptian products in government contracts.

Furthermore, 58,000 qualified technical workers have graduated to meet the needs of the industrial sector, with 3,000 new Egyptian standards issued, and the launch of the Egyptian Halal mark. This comes in addition to Egypt obtaining international recognition from the European Accreditation Services.