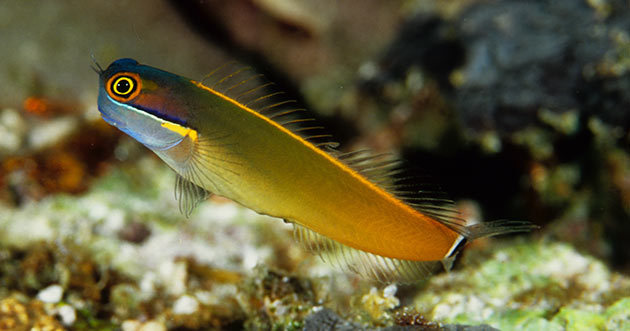 Research on blennies, a family of fish that have evolved physical qualities for terrestrial life, suggests that being a “jack of all trades” gives species a greater chance of survival.

So say findings by researchers from Australia’s University of New South Wales and the US University of Minnesota. The study was published on Tuesday in the British Ecological Society’s journal, Functional Ecology.

The research pooled data on hundreds of species of blennies, a diverse family of fish in which some subspecies have remained firmly aquatic. Other subspecies have literally gone from being the “fish out of water”, to developing the qualities needed to live on land.

The study investigates the evolutionary factors that might have allowed what were initially solely aquatic fish to transition onto land, and to evolve into almost entirely land species.

The researchers found that flexible diet and behaviour were likely instrumental in the transition to land living. And once out of water, restrictions on the type of food available triggered major evolutionary changes, particularly to the teeth. As a result, land dwelling blennies have become specialists in scraping algae and detritus from rocks.

However, it was found that there was still some dependence on water among land blennies, despite having actively colonised land. Although they may avoid entirely living in water habitats, and are very defensive of their territories, they still choose to reproduce in areas amongst rocks in the splash zone.

Land blennies have to remain in that splash zone to keep moist to breath effectively using their gills and through their skin. Evolution away from the intertidal splash to inland areas has not quite happened – yet!

Dr. Terry Ord, Director of Research, University of New South Wales’s School of Biological, Earth, and Environmental Sciences, and lead author of the study, made further light on their findings.

He said he and his team found that a broad diet and innovative, flexible behaviour have been a precursor to blenny fish emerging from water for a life on land. But once out of the water, these remarkable land fish have faced restrictions on the type of food available to them.

“This has triggered major evolutionary adaptive changes in their morphology, in particular dramatic changes in their teeth, as the fish have been forced to adapt into specialist scrappers of the rocks to forage on algae and detritus,” he explained.

Ord told Daily News Egypt the research findings suggest being a “jack of all trades” can open the door to making a dramatic change in habitat. That includes flexibility in the types of food you can eat, and in being able to leave the water for very brief periods of time. The latter point has been put across as the precursor stage to being flexibly amphibious.

But making such a large transition in habitat can mean that these fish have to evolve specialised behaviours to flourish on land. They had to evolve from a jack-of-all-trades to a master-of-one, with diet narrowing and teeth subsequently adapting to partake of the more restrictive diet.

This means that there is the very general question of why fish leave water and attempt to live on land. There really does need to be an adaptive advantage for making such a transition.

“I’ve previously found in earlier studies that avoiding nasty aquatic predators is a big motivator for these fish to spend time out of the water,” he noted.

The study extends this to illustrating how a broad diet has enabled certain fish to not only leave water for short periods. It has also shown how they can exploit land detritus without fear of predators or competition, leading to an eventual full transition to land.

This general scenario of fish colonising land has obvious parallels to the origin of all land vertebrates in the Late Devonian period, about 376–360m years ago. Fossils dating from that period can give us a lot of important insights into how that transition might have unfolded, and the types of evolutionary adaptations it required for the transition to happen.

But having a contemporary example of fish making similar ecological transitions can also help us understand the general challenges that fish face out of water. This goes beyond the obvious issues relating to being able to breathe, and being able to move about on land.

Ord concluded that these fish not only provide glimpses of water-land transitions might have been like millions of years ago. They also allow us to study why any species might make such a big transition into a completely different habitat.

The question remains, why would a species that is presumably well-suited and adapted to one habitat feel the need to leave that home for another habitat that is very different. It also raises questions about a transition to a habitat for which they are less suited for the conditions that might be experienced.

“We know species make these transitions in habitat because there is ample evidence these transitions are responsible for the evolution of many of the species we see today,” Ord said. “They also reflect the diversity in morphology and behaviour we see across different species, and our study investigates the mechanisms behind making those transitions in the first place.”

Ord further explained that the study’s general implications show that a broad diet or flexible behaviour can help you move into a new habitat. But once there, this flexibility becomes eroded through natural selection.

This presumably means those highly specialised species are less likely to be able to make further habitat transitions, or cope with abrupt environmental changes in their existing habitat.

“The blennies are a very exciting group to study, from both an ecological and evolutionary standpoint. They allow the unique opportunity to see how habitat transitions occur in nature, and also the evolutionary causes and consequences of those transitions,” Ord said. “This is unique because the ancestral aquatic species, the transitional amphibious species, and the permanent land species are effectively ecological and evolutionary snapshots of a major transition unfolding in nature. And there is so much more to study!”