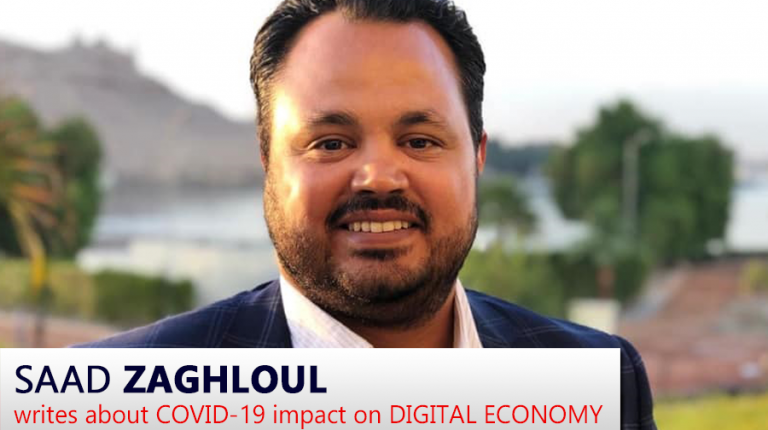 If we are going to speak about Egypt, the infrastructure, whether cable and broadband internet landlines or 5G, we need a leap in both . Digital transformation depends on several aspects, such as the preparedness of all concerned ministries and bodies for it, the acceptance of the population, and presence of policies to accelerate it.

Also, it needs importers, manufactures, and assemblers of such technologies, as well as investors who are willing to invest in such infrastructure.

We certainly need to stop and study how this pandemic proved that the majority of business, banking, education, and health care can be digitalised.

However, our infrastructure is still not fully ready to provide digital services to Egypt’s population of 100 million.

Towards a digital economy

Following the COVID-19 pandemic, digital transformation has become a popular demand, not a luxury.

The pandemic showed us how digital transformation has cushioned the impacts of the pandemic. It has become clear that countries that invested in digital infrastructure managed to limit the impact.

Last year, the UN launched the “Digital Economy Report 2019”, which showcased statistics that the combined value of ICT platforms registered more than $7trn. These companies has a total capital of merely $100m. Over the past four years, the number of companies dealing with data increased by 70%.

These companies transform bulk data into smart data, using technologies such as artificial intelligence (AI), these data gets analysed to support the decision maker.

Such transformation did not appear suddenly, it the brain child of several policies and strategies adopted by countries to support these companies.

This showcased the importance of digital economy and the investment in digital infrastructure. The UN report also indicated that the top two economies who adopted a supportive policies towards digital economy are China and the US. Accordingly, most of the patents in this sector are from these two countries. For example, 75% of cloud computing-related patents are owned by the US and China, and they also make up more than 50% of ICT investments, 75% of Cryptocurrencies patents, and 90% of the top 70 tech companies.

According to the report, 90% of internet searches are completed through Google, more than 30% of e-commerce takes place through Amazon, 30% of cloud infrastructure is also through Amazon, and 66% of social media is through US platforms. Chinese companies Alipay and WeChat now has billions of users, and handle trillions of online payments.

The infrastructure allowed millions of Chinese nationals to communicate during the COVID-19 pandemic. More than 300 million students in China were studying remotely during the pandemic.

On 14 February, Chinese President Xi Jinping said that AI and big data analysis would lead the way in combating the coronavirus. On 21 February, he also said that investments would be poured into these technologies and 5G, as well as directions to boost all digital services, and internet speed.

Without having a strong infrastructure, China would not have been able to absorb the surge in internet usage by 50 to 100-folds, across all sectors, education, business, and health care.

5G represents a major shift if compared to 4G, unlike the shift from 3G to 4G which just offered higher speeds. In terms of speed, 5G carries 50-fold of 4G, but this is not the what makes it revolutionary, the bandwidth. It could also provide the extra bandwidth needed to create what’s being called the Internet of Things (IoT) — a network that links not just phones and computers but also robots, cars, and all manner of sensor-equipped consumer products and infrastructure. Instead of just the 7 billion devices that are currently supported by 4G, it will be able to support 100 billion IoT devices.

Another, important aspect is the latency,  though it’s not always noticeable, as there is often a brief lag in time from when data is sent to when it’s received. 5G should reduce this so-called latency, making it possible, thus opening the way for industrial uses and health care remote procedures like robotic surgery.

These technologies would allow doctors to consult and treat people in remote areas where no health care expert are available for example.

That’s why 5G is a revolution, which countries are racing to achieve. The US realised that it lags behind when it comes to this technology, as China had the advantage, that’s why it started trying to impede other countries.

No body owns 5G, any country can have it, as its specifications are standardised by the International Telecommunication Union (ITU), which has experts, scientists, and representatives from all over the world. The ITU is responsible for all telecommunication, whether mobile, satellite, etc, so every manufacturer will have to commit to the specifications.

In the late year, every European and Chinese producers participated in this and invested a lot when it comes to 5G, which is why there is no real difference between 5G devices produced in the US, China, and Europe as they all are per ITU. When it comes to the security 5G is more secure than 4G, it is almost 100% more secured than it. That’s no a personal opinion this is according to the ITU specifications.

From an engineering and safety point of view, disinformation about 5G safety is widespread, however, it does not have any scientific backing, as 5G follow the World Health Organization’s (WHO) instructions for telecommunications.

Every producer ensures commitment to these specifications, either Huawei, Ericsson, or Nokia.

United States is racing to catch up to other countries, maybe that’s why it started create a smoke screen by quibbling about the Chinese advance in 5G.

5G will have huge impacts on countries with less-developed telecoms infrastructures, such as Egypt, as the country still lags behind in fibre optics infrastructure, which would take years to reach remote areas. That’s why 5G would be an excellent alternative in Egypt.

Take a look at how the UK handled the rhetoric about Chinese 5G technologies, as they realise that  it doesn’t pose a threat to its national security.

Digital transformation became a popular demand in Egypt following COVID-19 pandemic. To do so we need to adapt several policies, such as strengthening readiness to engage in and

benefit from e-commerce and the digital economy, leveraging niche areas and domestic opportunities, including for women, digitalization of MSMEs, intellectual properties, data and competition policies.

Also, Governments: Continuously enhance investment in digital infrastructure, especially the expansion of broadband coverage, and the adoption of cloud technology to ensure fair competition and inclusive growth in our own economies throughout the global digitisation process.

They also need to work with scholars, technology providers, as well as education and labour departments to ensure that digital resources are more widely and readily accessible. This will also see an improvement in the digital knowhow of specific subsets of the workforce, and cultivate a group of exceptional talent that is well positioned to meet future needs

In Egypt’s case Huawei can play a big role towards digital transformation, as it has been operating in Egypt since 1999 and currently has extensive and in-depth cooperation with local mainstream telecom operators, government and industry customers. It built the first OpenLab in Northern Africa in Cairo, Egypt. Huawei have promised to invest more in capacity building and support government’s digital transformation. Over the years, the company has continued to promote the development of Egypt’s ICT talents through different projects.

The effects of the COVID-19 pandemic on digitalisation will be massive. On an individual scale, it will lead to changes in the individual online social behaviour, normalisation of online consumption, and quick adaptation to online offices.

On an organisational level, social governance to be upgraded, online and offline collaboration reforms in traditional industries, and popularising of outsourcing services.

Saad Zaghloul is the CEO and Editor in Chief of Daily News Egypt. He is also the Co-founder, CEO, and Chief Executive Editor of Alborsa newspaper.

Opinion| Science has delivered, but will the WTO deliver?

TE cooperates with Ericsson to modernise its international portal