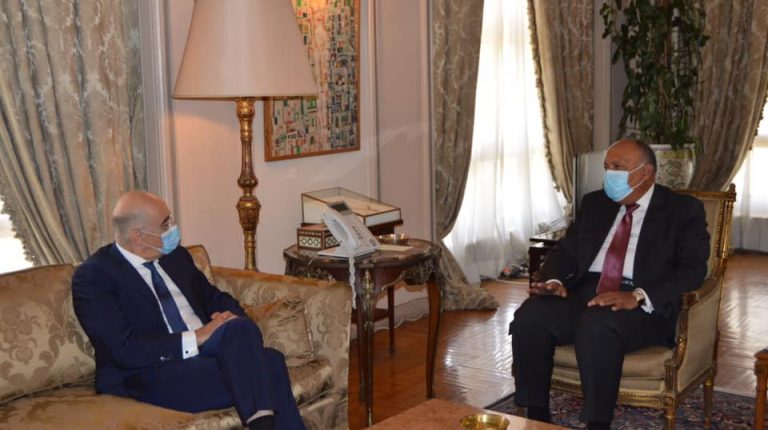 During the discussions, the ministers covered the Grand Ethiopian Renaissance Dam (GERD), the Libyan crisis and outbreak of the coronavirus (COVID-19).

On the meeting’s sidelines, the two countries held the twelfth round of technical negotiations on delimiting maritime borders between Egypt and Greece, said Foreign Ministry Spokesperson Ahmed Hafez.

Shoukry and Dendias reviewed to his Greek counterpart the latest GERD developments, during which Shoukry noted that the deterioration in negotiations was due to Ethiopian intransigence. Ethiopia’s stance came despite Egypt’s seriousness in reaching a fair and balanced agreement taking into account the interests of the three countries involved in the negotiations.

The two ministers also exchanged views on the overall situation and ways of dealing with developments in the region, the most important of which is the situation in Libya.

Shoukry reaffirmed the importance of working towards supporting the recently launched Cairo Declaration, an Egyptian-led initiative supporting peace in Libya.

The initiative was put in place to reach a comprehensive political solution for Libya that preserves its state institutions and the Libyan people’s capabilities. It also looks to establish a new stage for preserving Libya’s sovereignty and unity, security, and stability, whilst guaranteeing the elimination of terrorism and extremism.

Dendias expressed Greece’s gratitude over the Cairo Declaration, which they hope will be successful in settling the crisis. He also stressed a rejection of external interference and related negative influences in Libya and across the region.

The two ministers also discussed developments in the Eastern Mediterranean region and its instability. They stressed the need for all parties to respect and implement the rules and provisions of international law. At the same time, the ministers also warned against the consequences of taking illegal provocative measures that increase regional tension.

The latest developments Palestine were also discussed, with Shoukry emphasising the need to preserve the two-state solution. He noted that the legitimate rights of the Palestinian people should also be preserved, up to establishing an independent state. This is an essential component of any comprehensive, just and sustainable settlement of the issue, Shoukry said.

He also warned against the dangers of any unilateral steps that would make the situation more complex and tense, and threaten regional stability.

Also during the ministerial discussions, Shoukry and Dendias looked at ways to combat the spread of the coronavirus (COVID-19). The ministers noted the importance of the international community’s solidarity in facing the pandemic and limiting its health, economic and social repercussions.

The ministers also discussed ways to advance and develop cooperation in various fields, and regional and international issues of common interest.

At the start of the meeting Shoukry welcomed his Greek counterpart to Cairo, appreciating the distinguished level reached by the cooperation between Cairo and Athens on various levels.

He also expressed Egypt’s aspiration to continue its development, whether at the bilateral level or as part of the tripartite cooperation mechanism with Cyprus.

Shoukry pointed out the priority that Egypt attaches to continuing coordination with Greece on all common issues. This would achieve the popular interests of the two countries, and support regional security and safety.

For his part, Dendias affirmed his country’s pride in the historical friendship between Egypt and Greece. He stressed his country’s keenness to continue working enhancing cooperation between the two countries in all fields.

He also stressed the priority Greece attaches to coordination and consultation with Egypt as a pillar of security and regional stability.